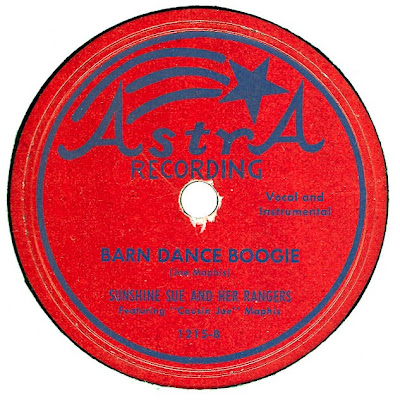 It was a widely held belief that Joe Maphis made his recording debut for the West Coast based LARIAT label in 1952, a belief which until recently I also subscribed to.

However, it transpires that he may have actually made his first recordings three or four years earlier, sometime in the late forties, with Sunshine Sue and her band for the obscure ASTRA label. There are no clues as to where this label originated, or who else may have recorded for this particular company. Given that Sunshine Sue, and Joe Maphis were both regulars at the time on The Old Dominion Barndance, out of Richmond, Virginia, it is not unreasonable therefore to suggest that this at least was where the recordings were made, the title suggests that the song was a reference to the Barndance itself.

Any additional information about this disc would be most welcome.