One of Cecil Campbell's more obscure releases, the second side features a vocal duet by Cecil Campbell and Millard Pressley. To the best of my knowledge this is the only secular recording that features Millard Pressley, an artists who is normally  associated with gospel material, look out for his excellent BLUE HEN disc. 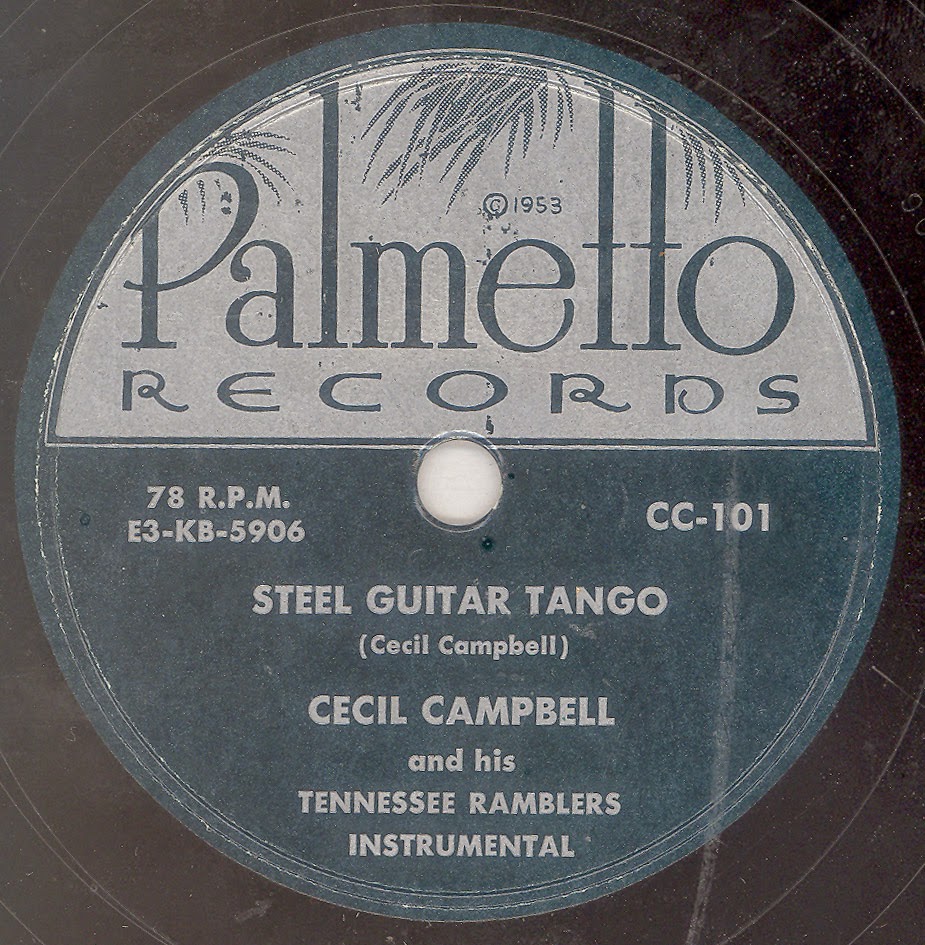 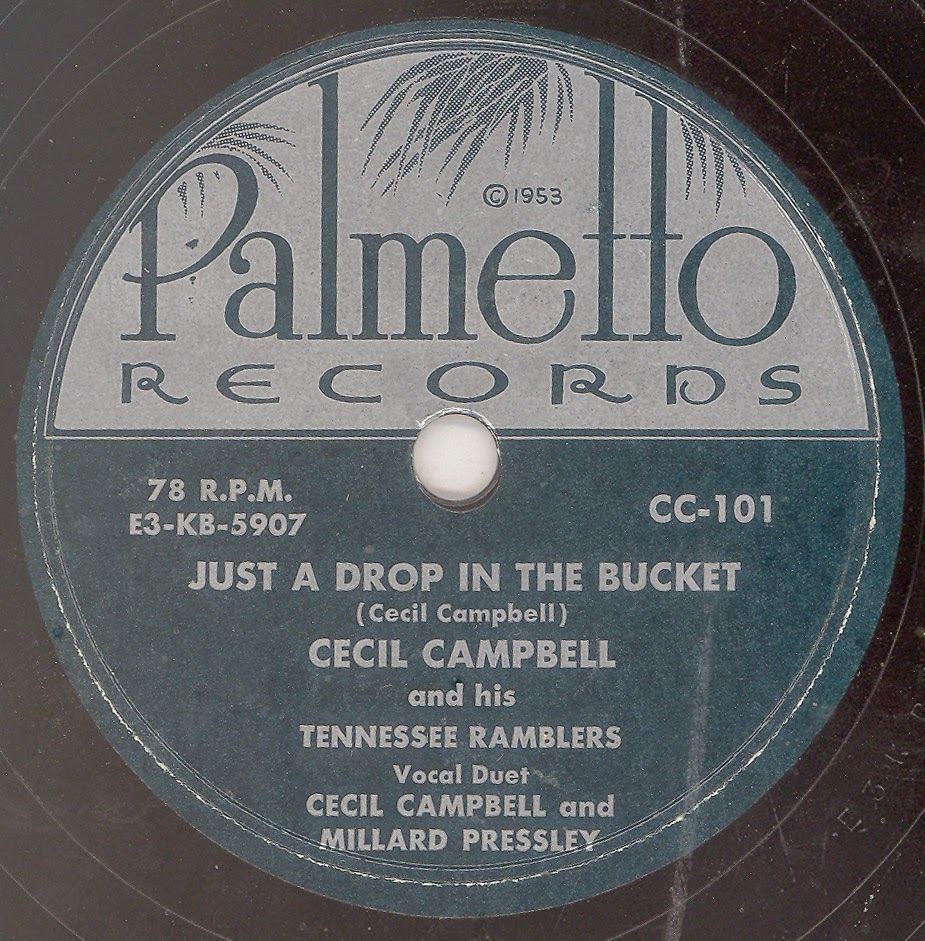 I've been trying, on and off, to set up a Country / Hillbilly / Bluegrass Gospel blog. I can't quite get it as I want it, I shall persevere and hopefully will find a solution to the way I want to lay out the blog. In the meantime here's a nice little gospel record from Georgia . 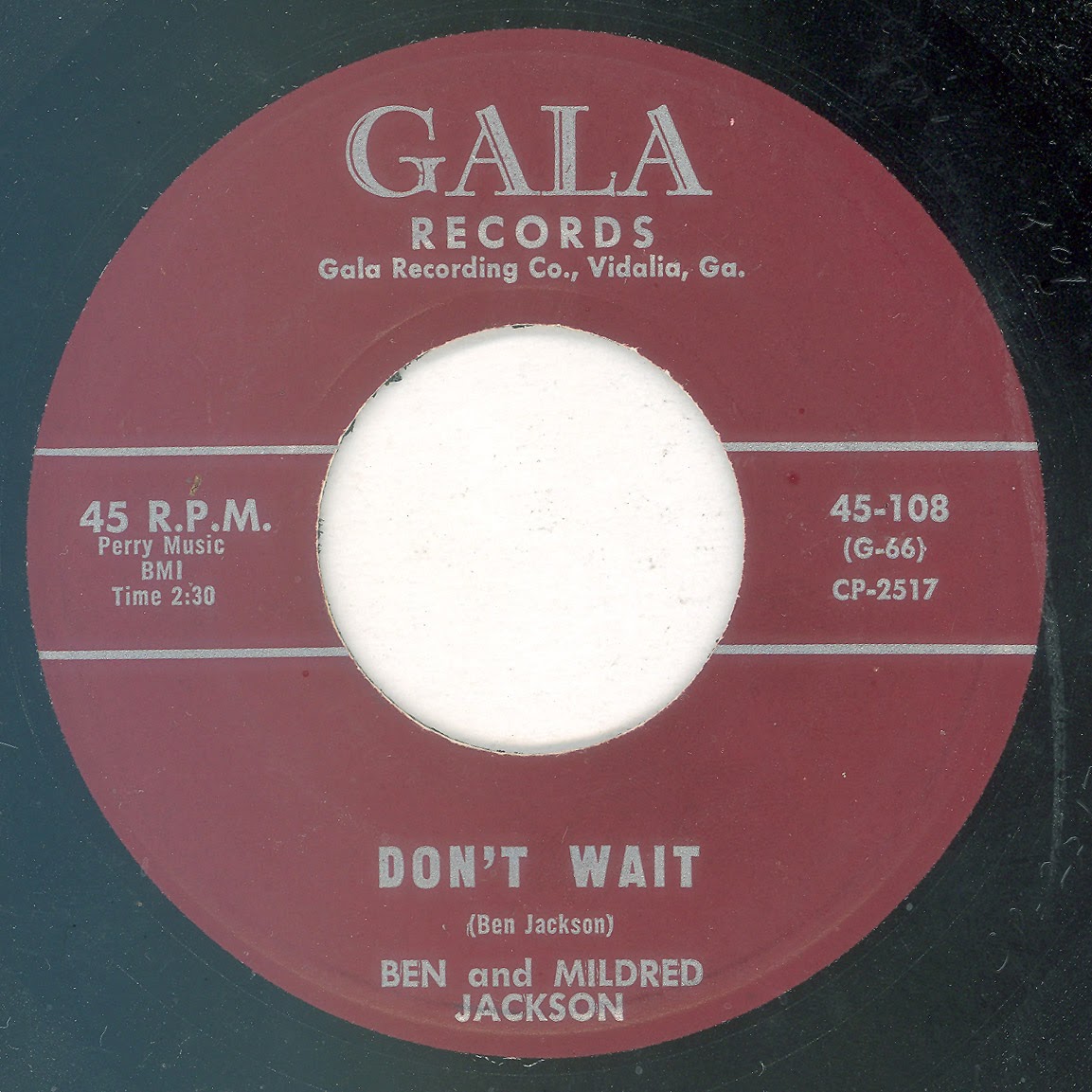 Posted by HILLBILLY RESEARCHER at 20:16 2 comments:

I thought it would be nice to have all the Vandergrift Brothers KING recordings in one place, so here are the two known releases on the label. Billboard reported, 30th March 1963, that the Brothers were recording for KING, which I assume refers to the release shown below (KING 5533). 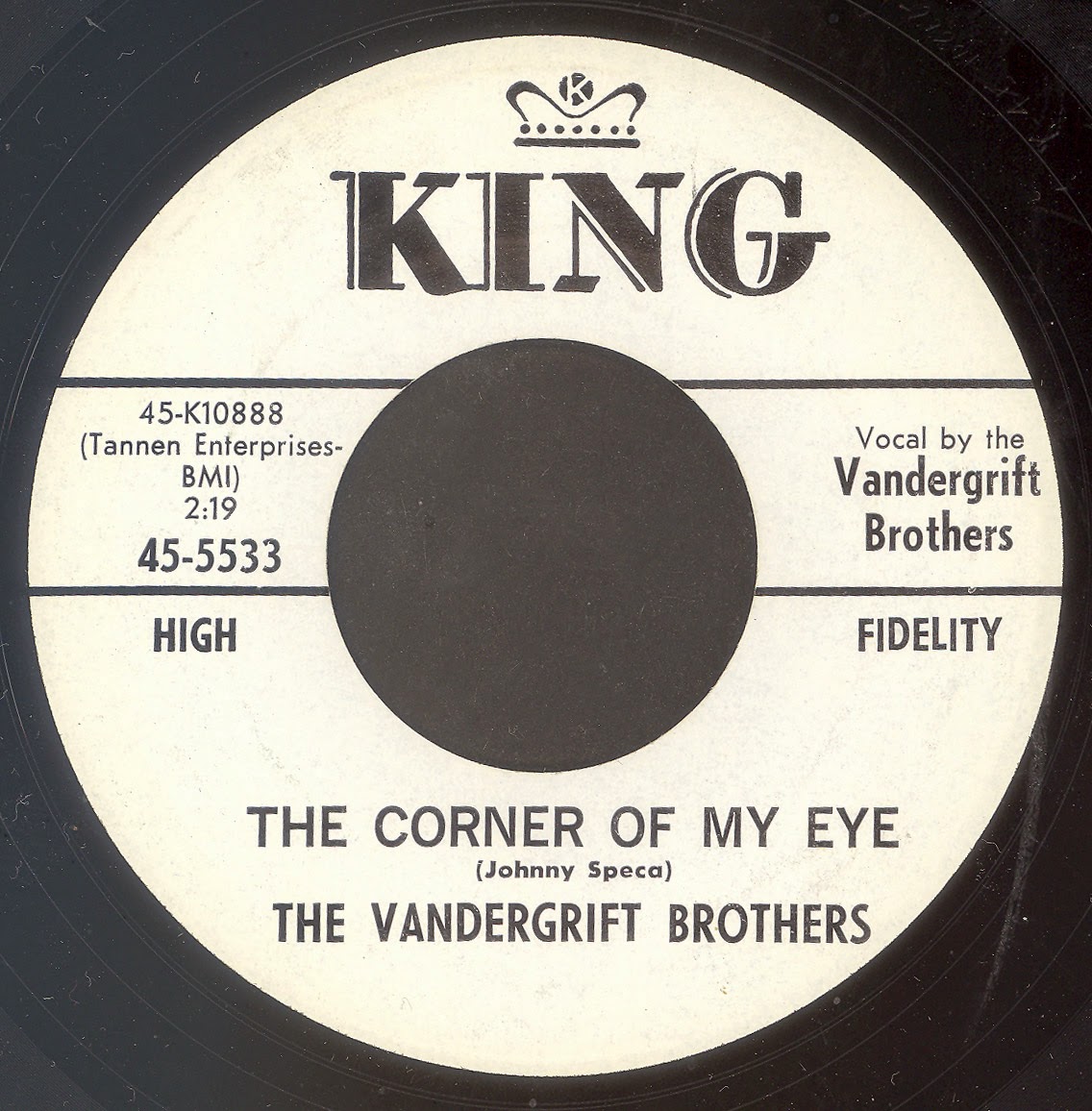 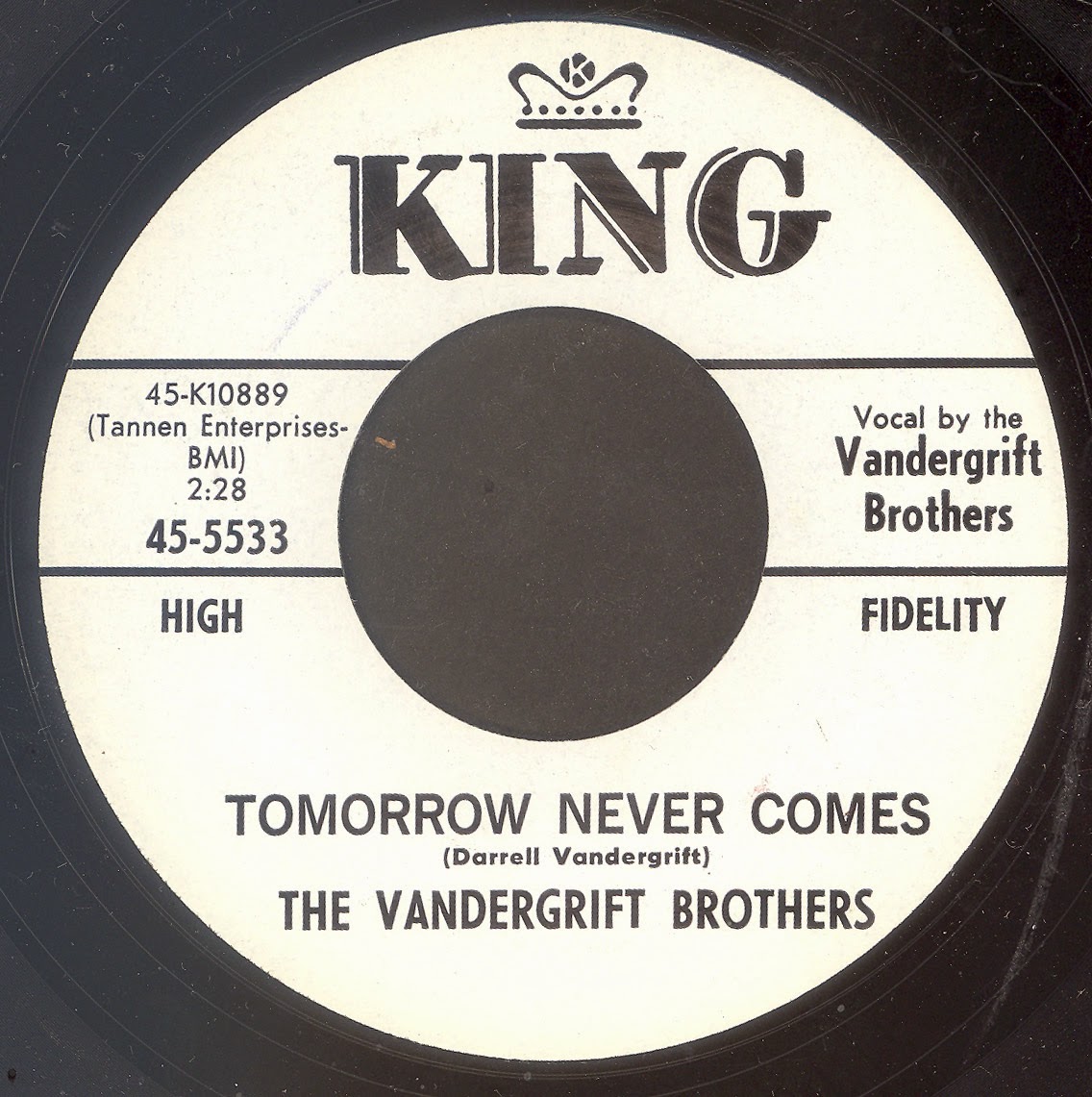 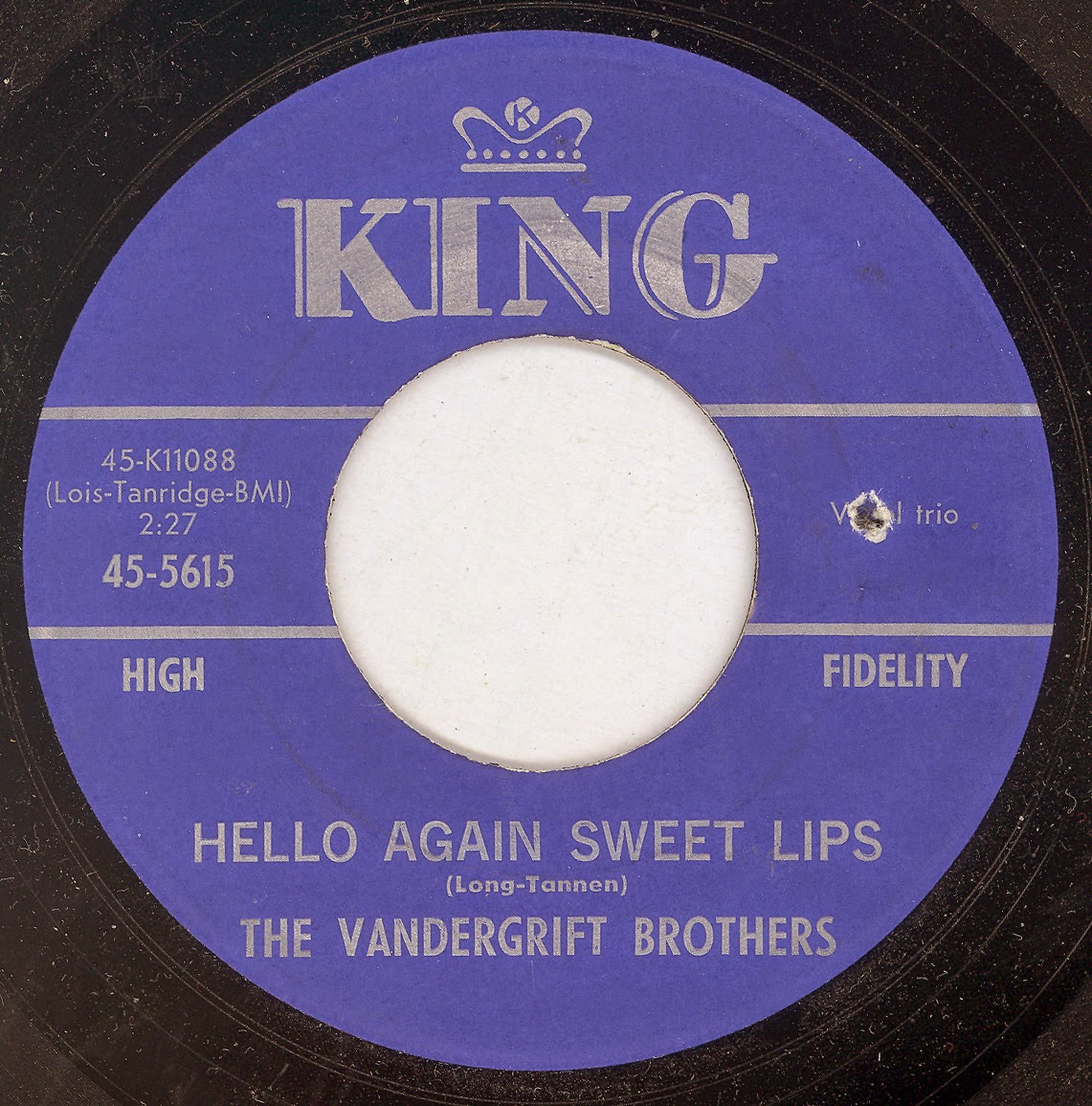 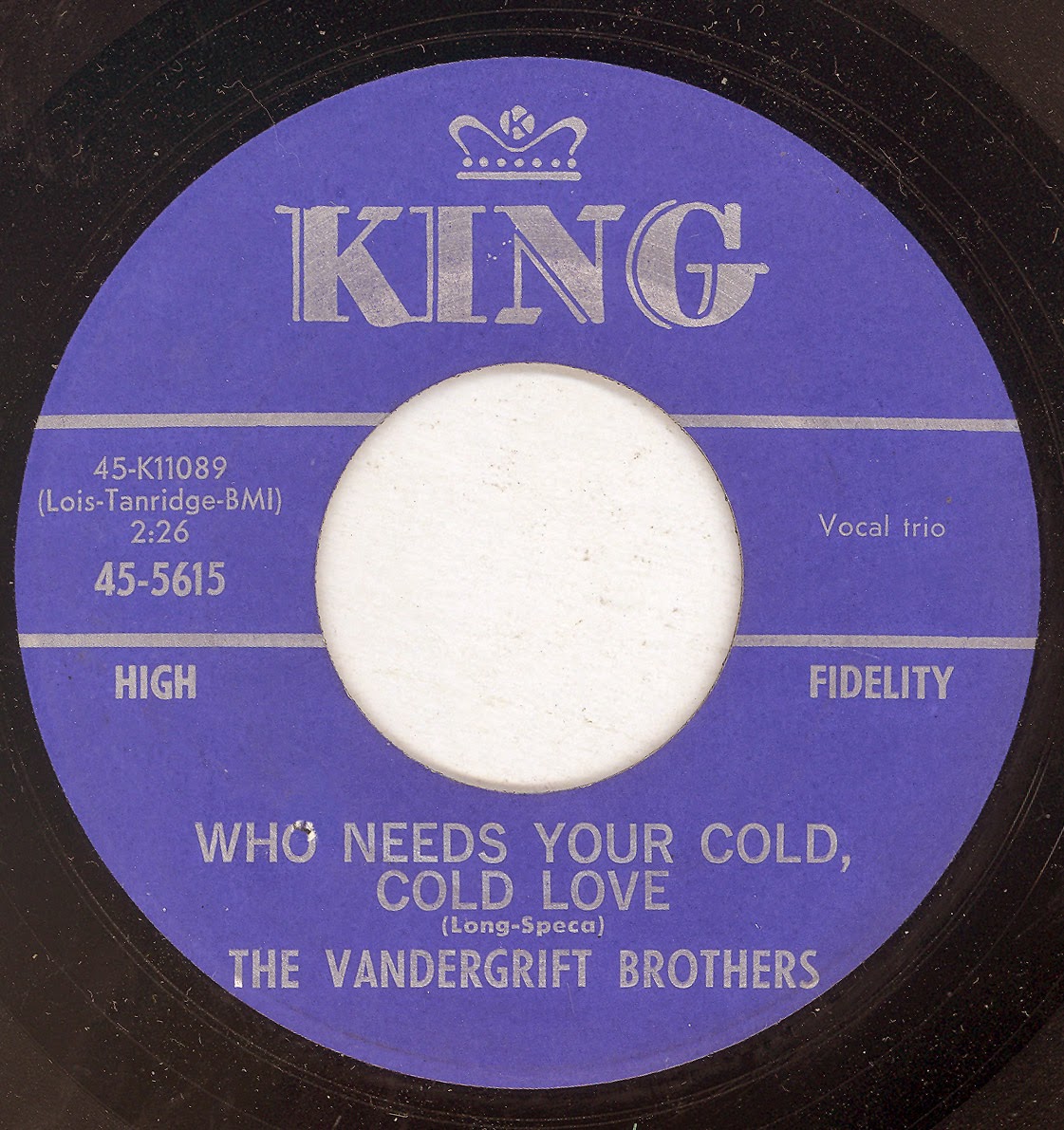 Posted by HILLBILLY RESEARCHER at 20:29 4 comments:

The Vandergrift Brothers, Don, Ronnie, and Darrell, were regulars on WWVA's Worlds Original Jamboree from Wheeling, West Virginia. Prior to their recordings for Hardrock Gunter's ESSGEE label in 1962, the brothers had recorded for the COZY label in 1959, and would later record for both KING, and the Wheeling EMPEROR label. Four of the six ESSGEE recordings were subsequently reissued on a RURAL RHYTHM album. 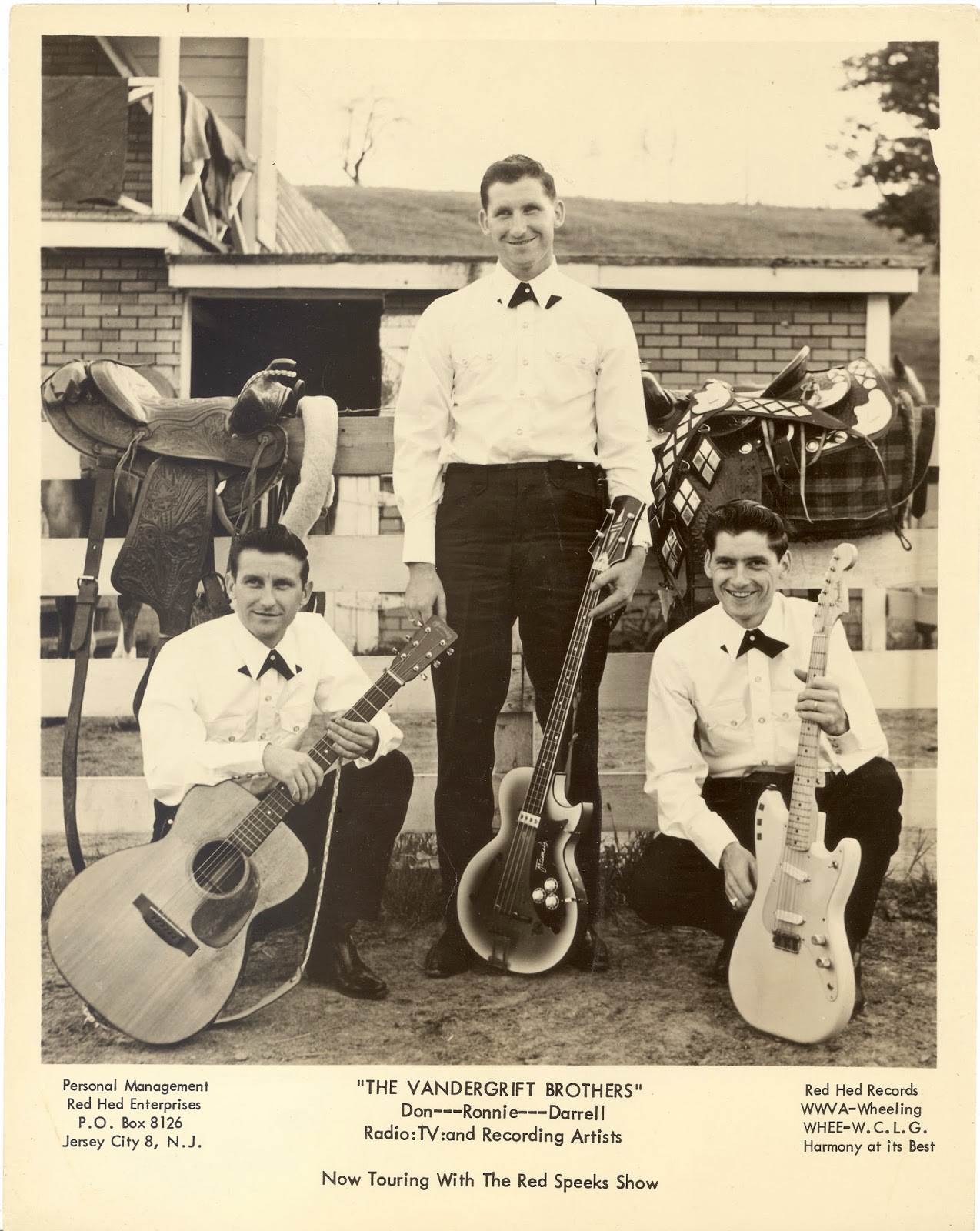 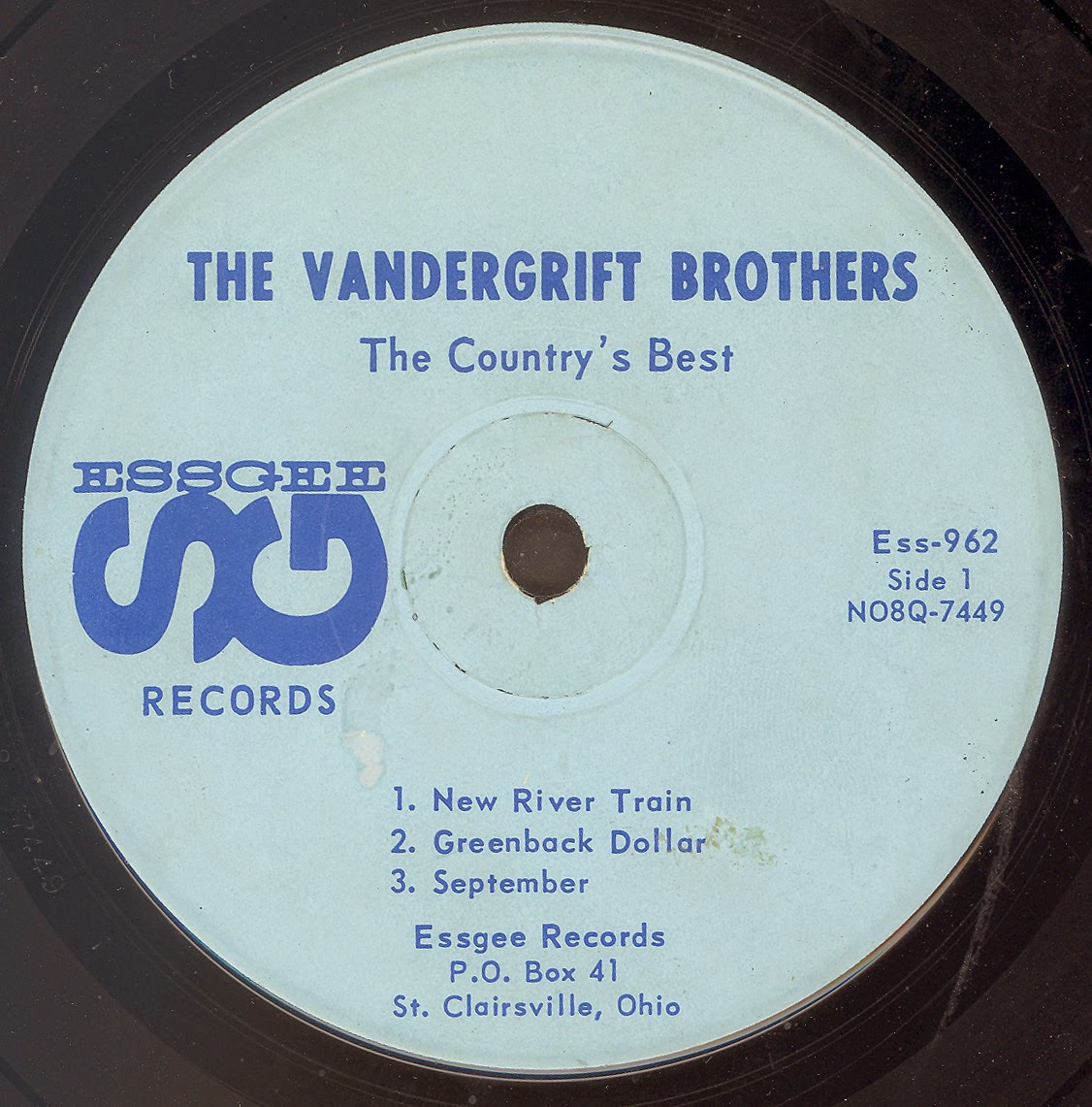 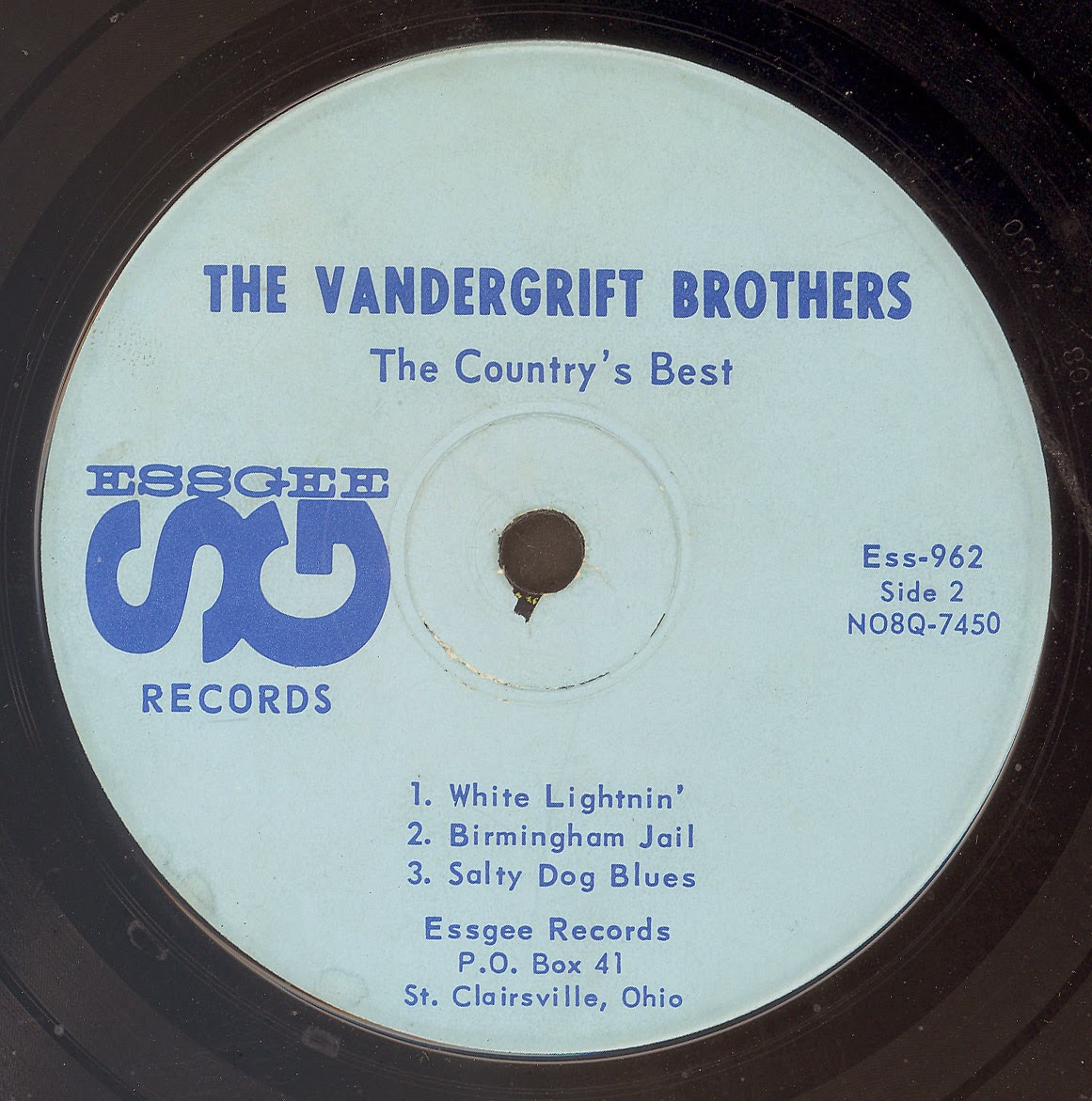 Posted by HILLBILLY RESEARCHER at 20:08 2 comments:

There is an excellent piece on The Jacoby Brothers to be found on HILLBILLY-MUSIC.COM (cut and paste the following into your browser -http://www.hillbilly-music.com/groups/story/index.php?groupid=11653
in which Gene's son Wade outlines the brothers story.

I once read an article on the Jacoby Brothers which stated something to the effect that Red River Dave (Dave McEnry), who was apparently the Brothers manager at the time, set up the TNT label in partnership with Bob Tanner as a vehicle to promote the brothers, and some of the other artists he managed, as well as himself. This notion is given some credence by the fact that McEnry is involved in one way or another in the majority of the early releases in the TNT 1000 series, which date from 1953 and 1954, but I don't think his involvement was long term. 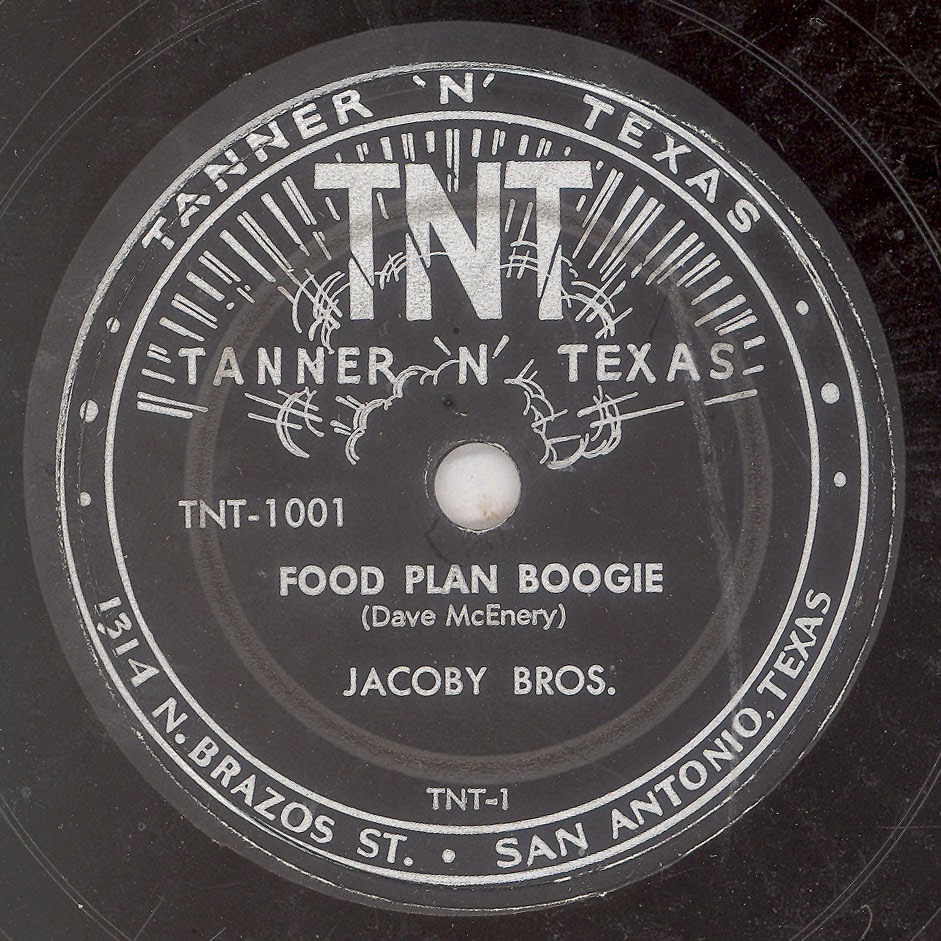 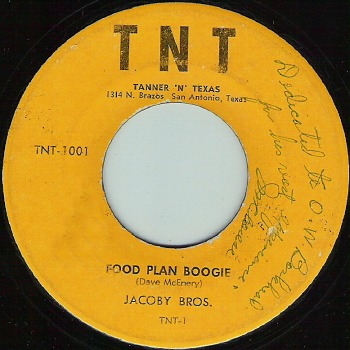 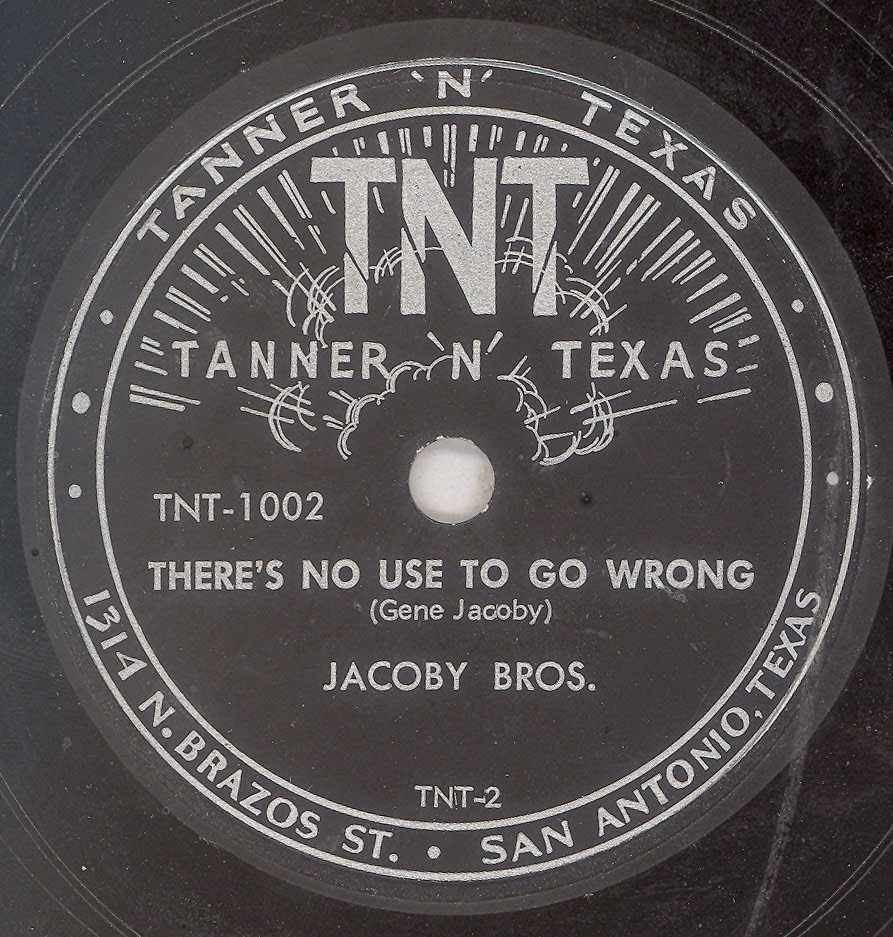 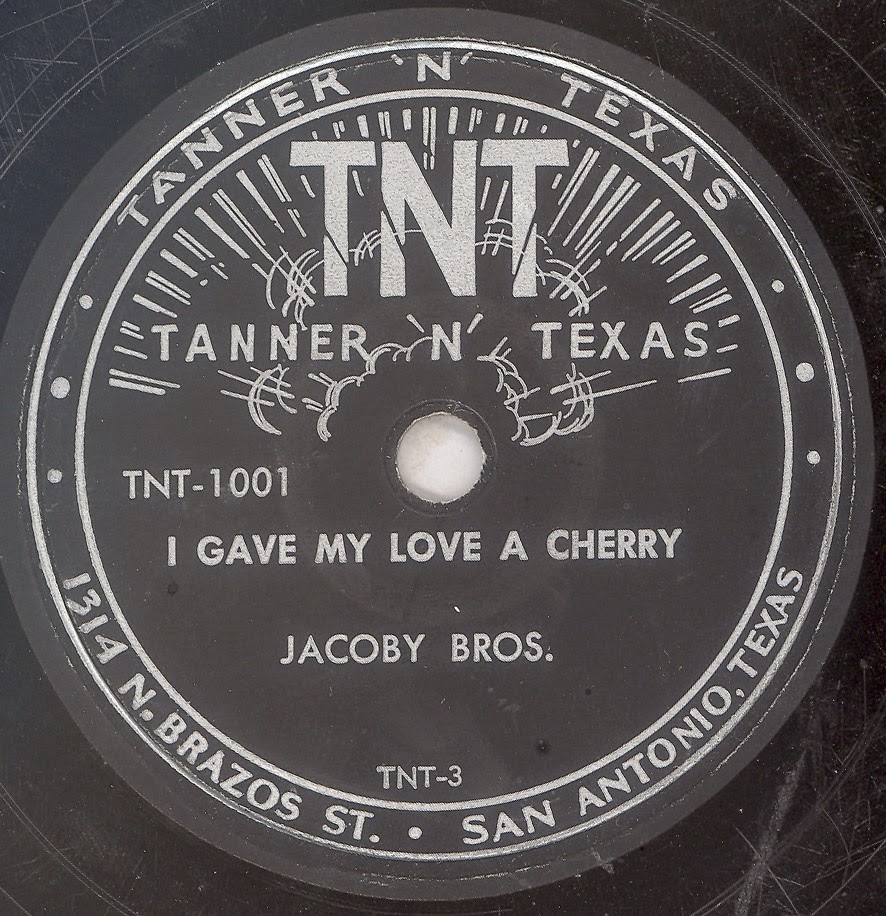 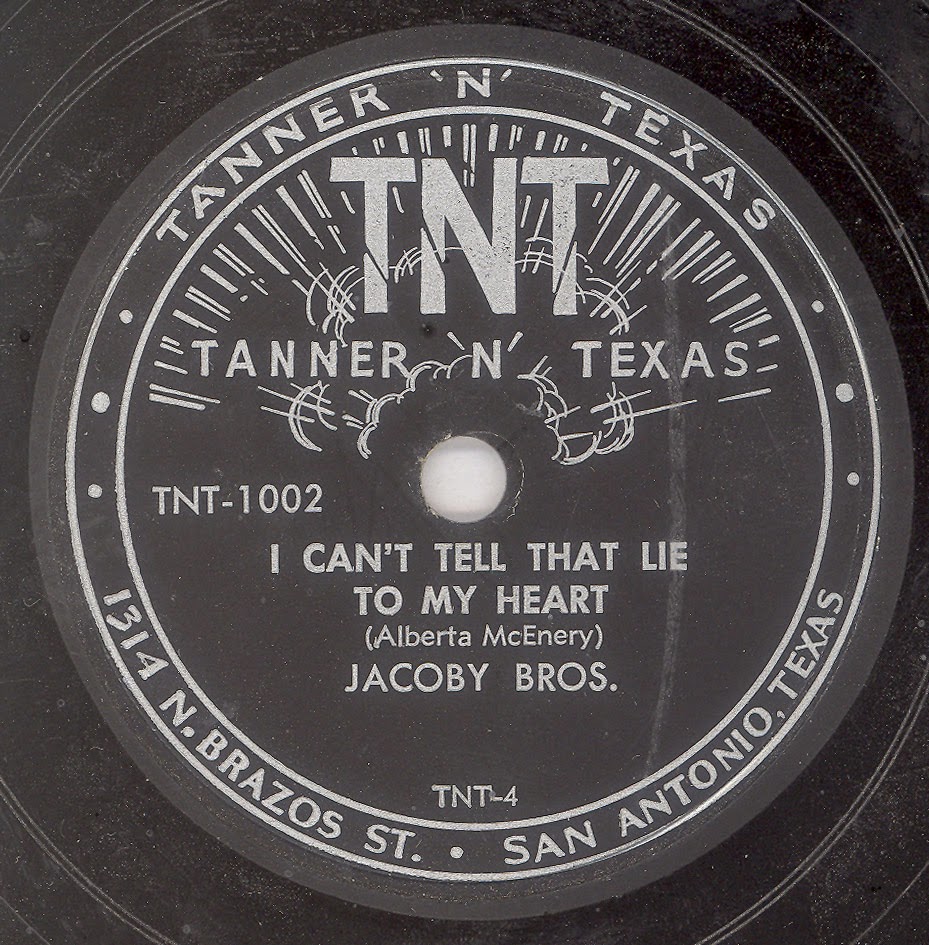 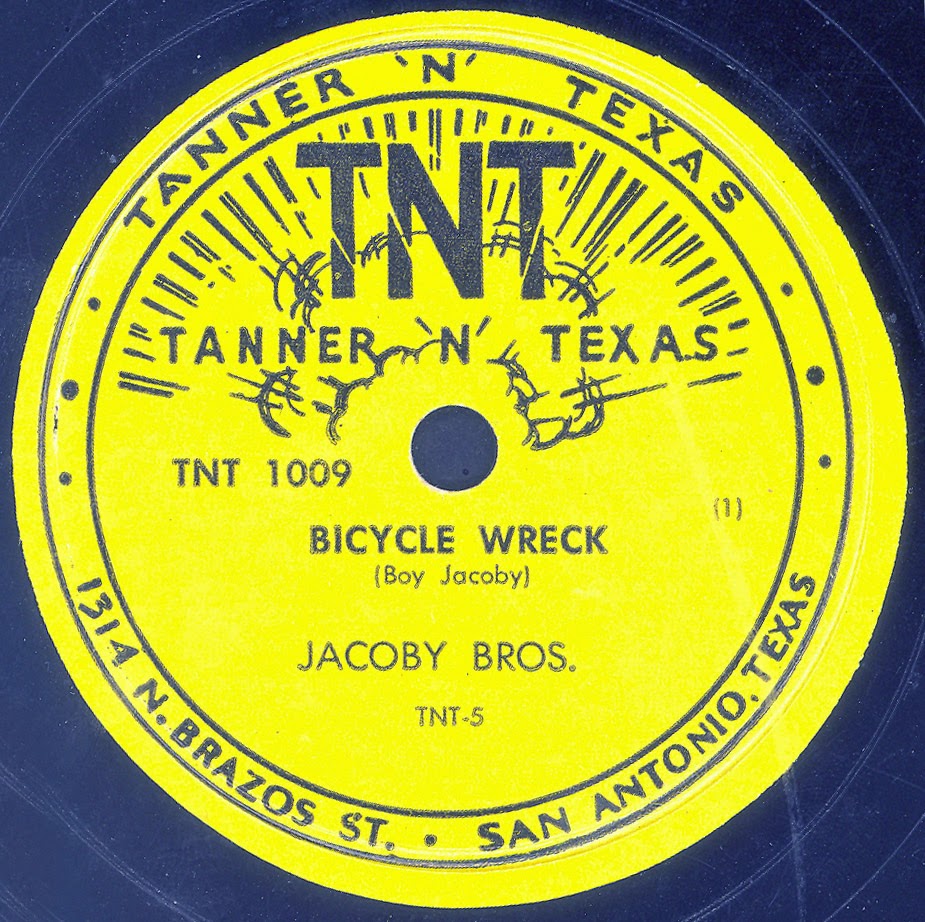 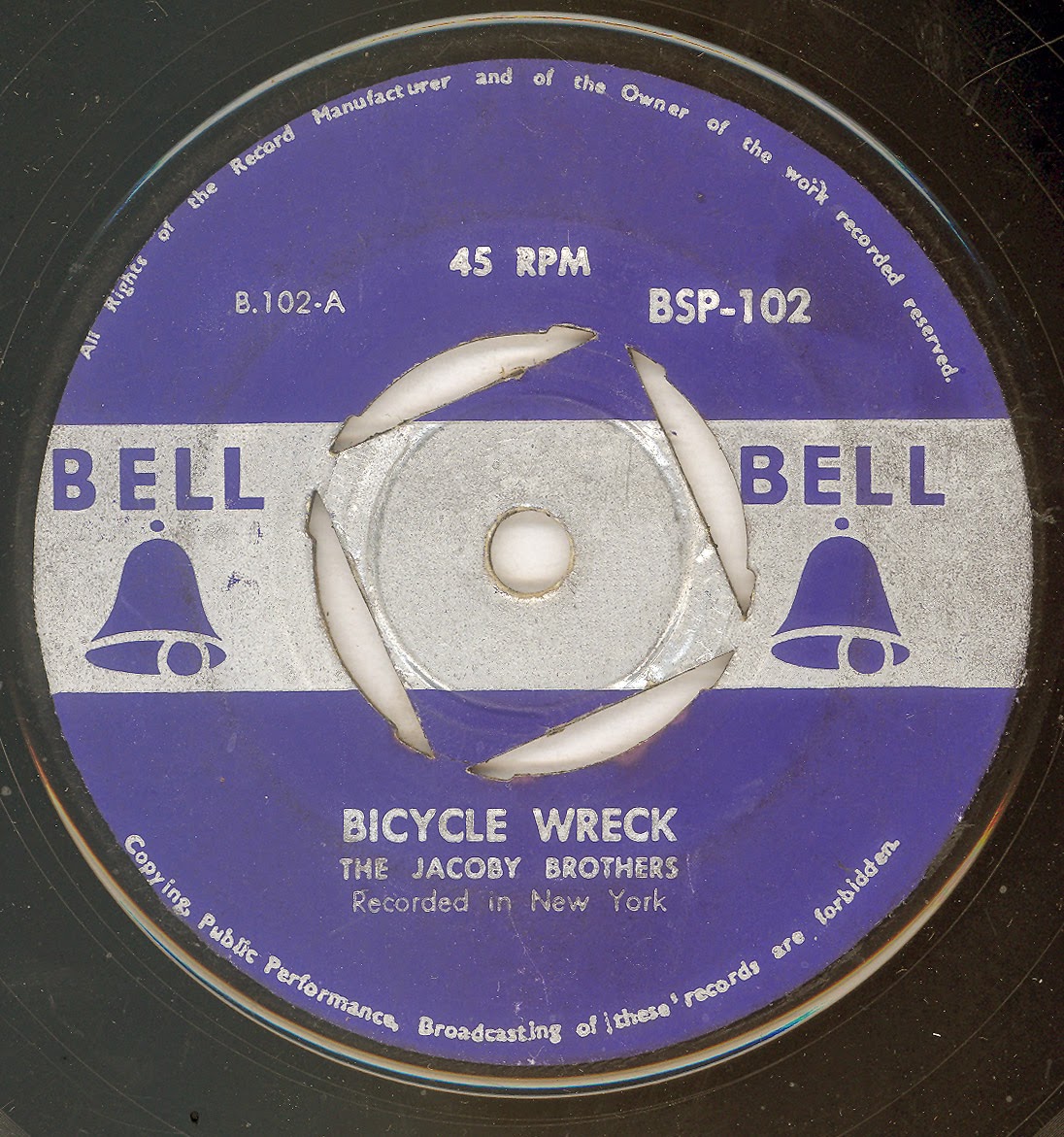 (Above) Australian issue of "Bicycle Wreck" 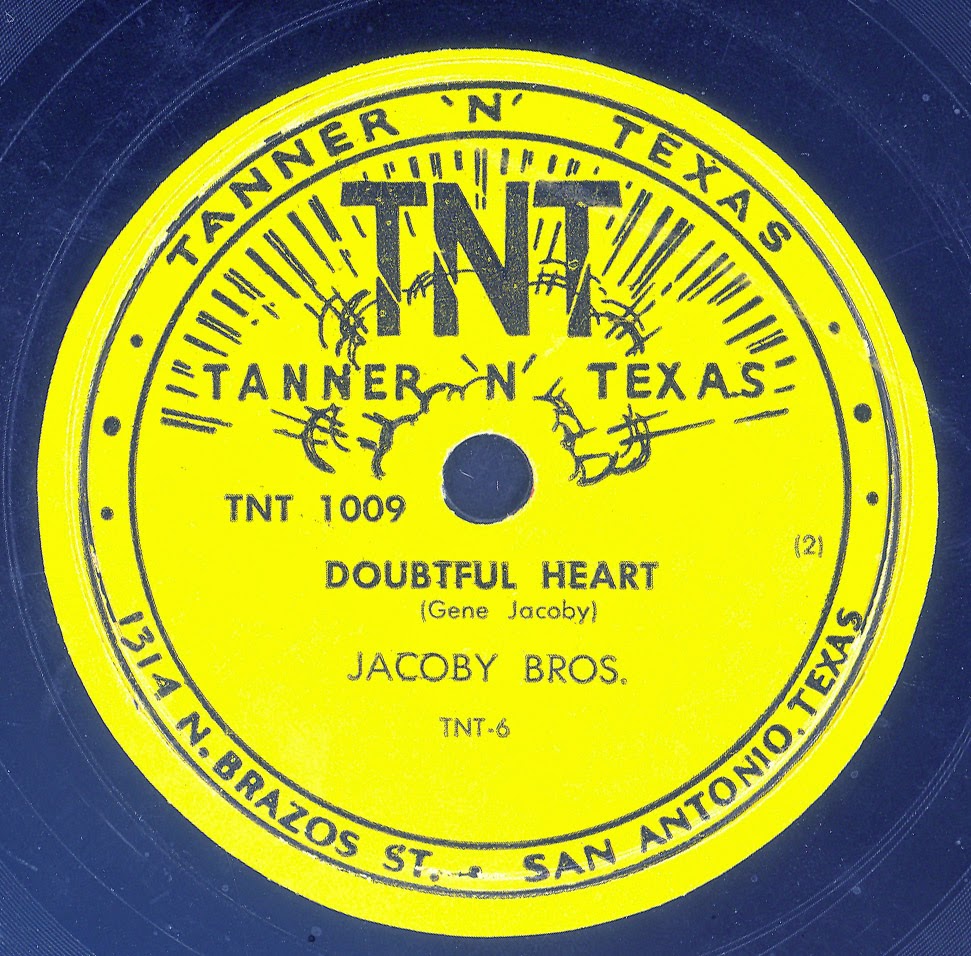 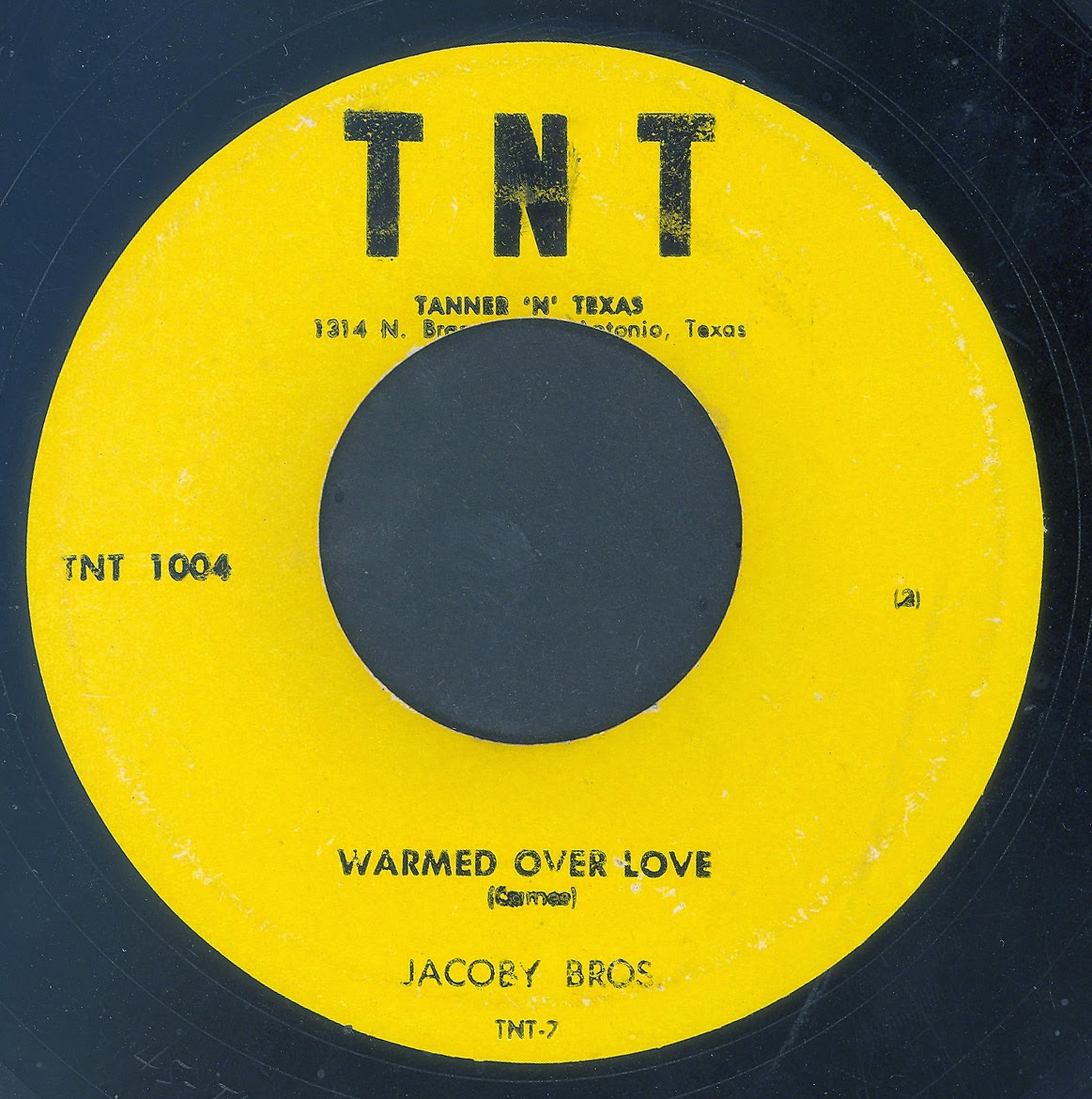 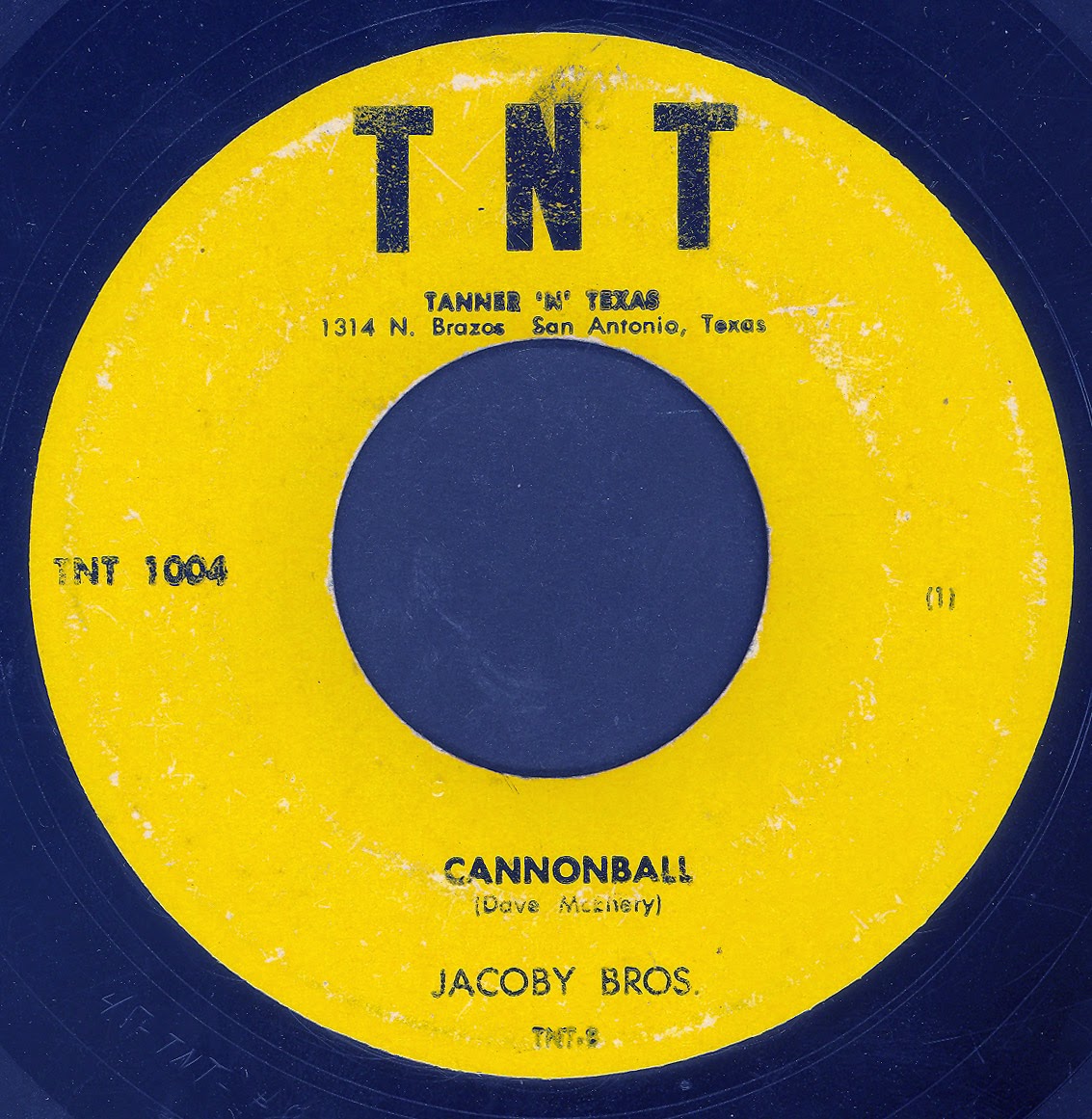 A later version of "Bicycle Wreck" by The Geezenslaw Brothers on which they added an additional verse! 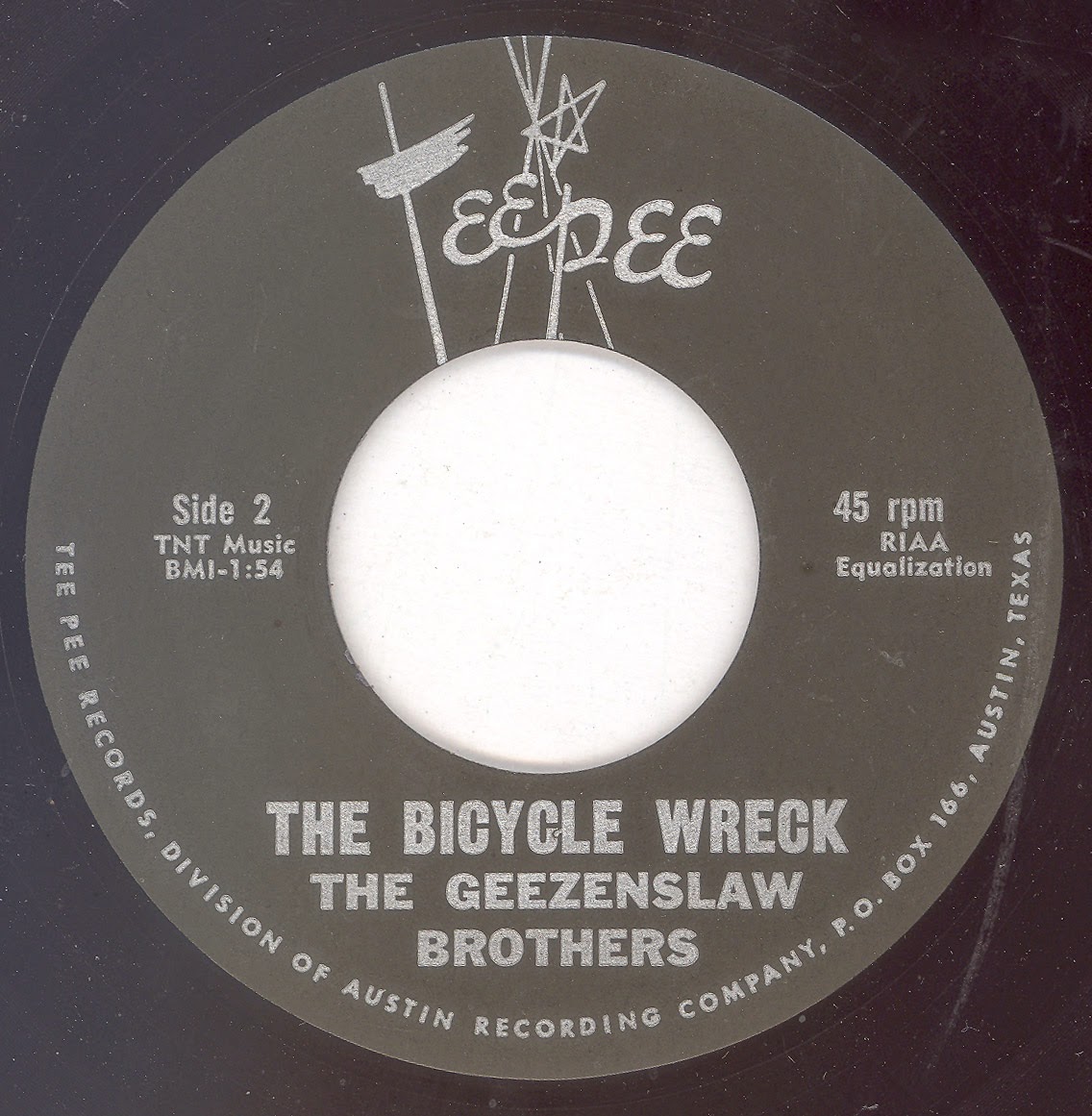 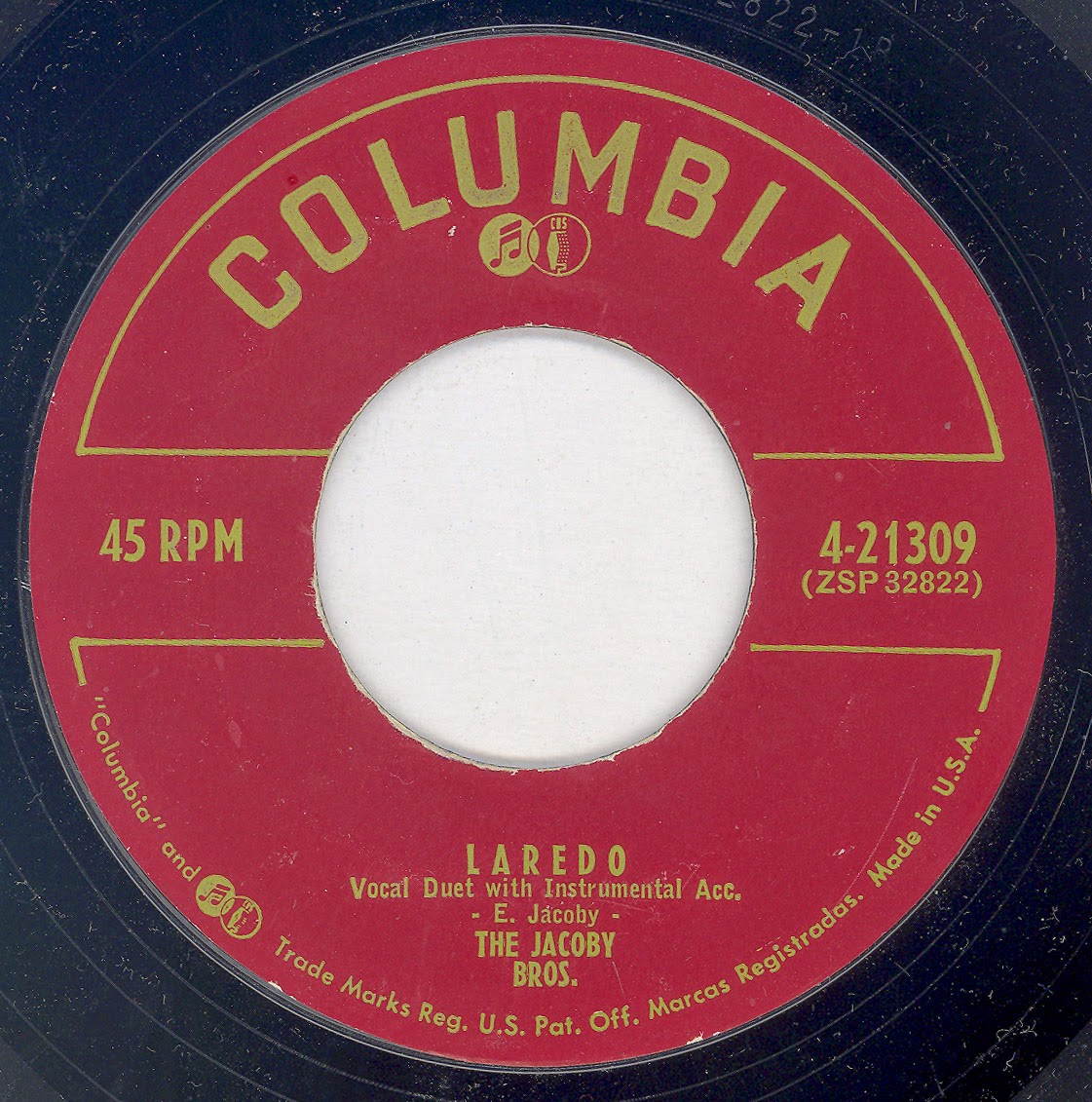 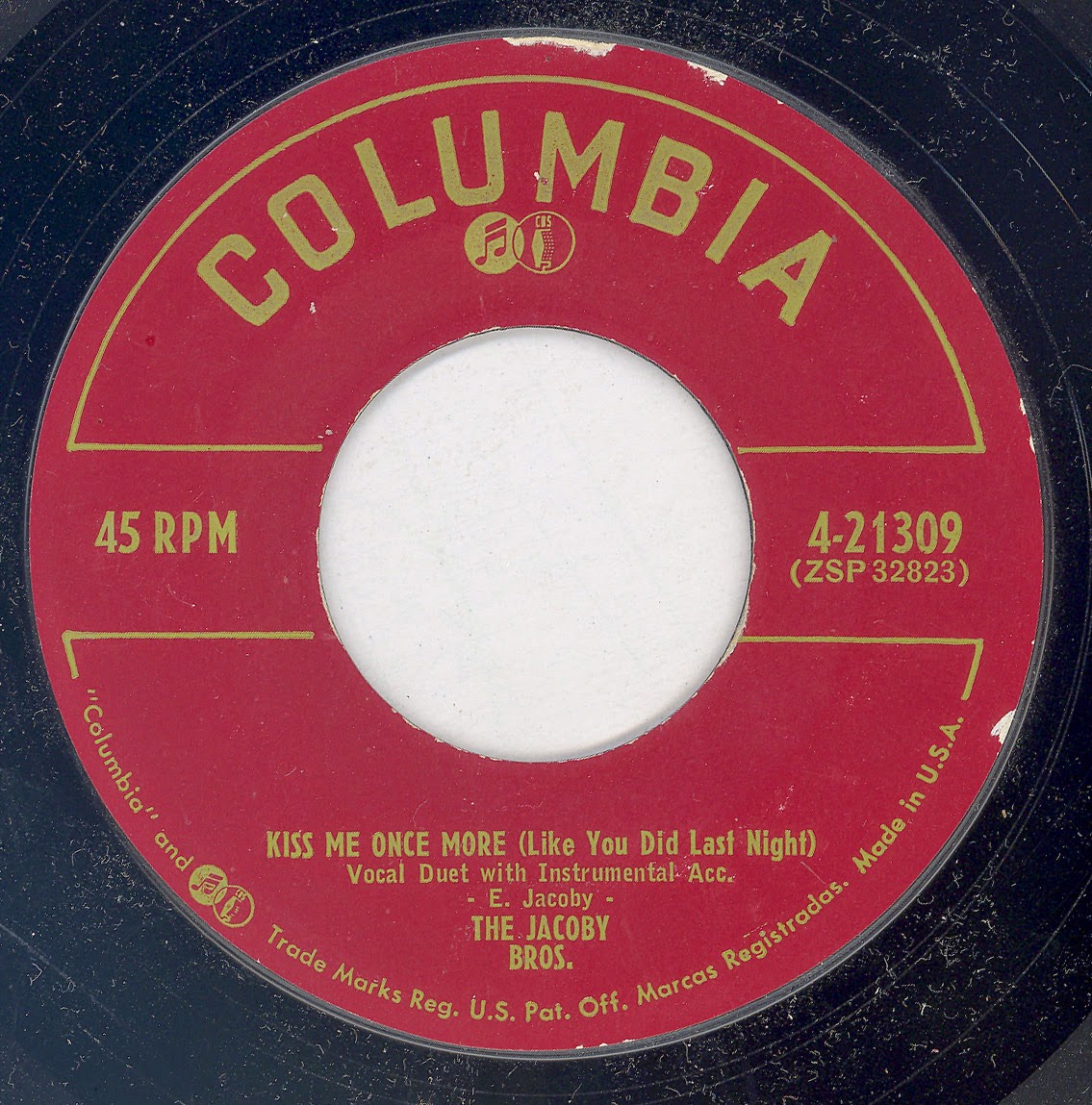 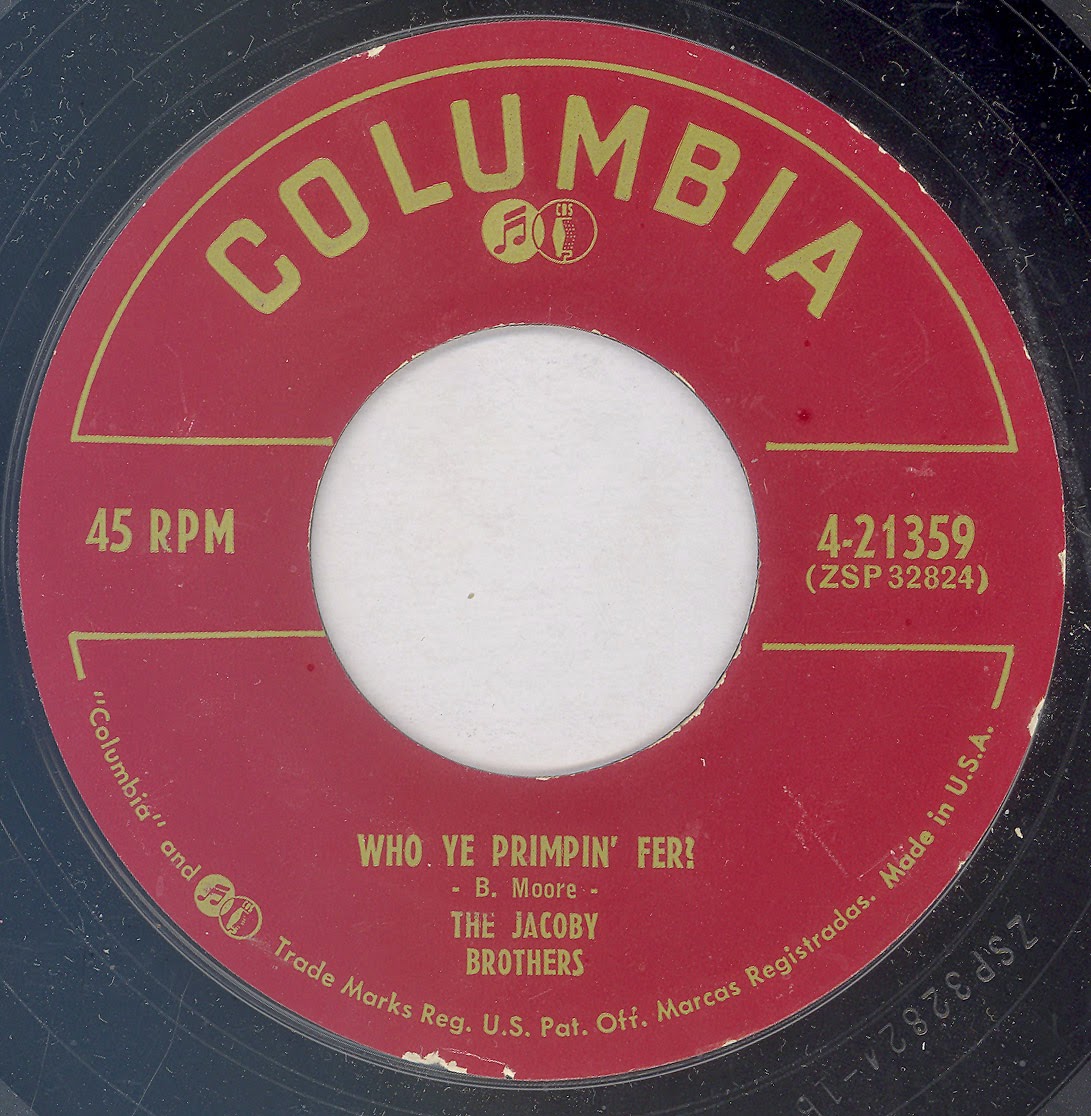 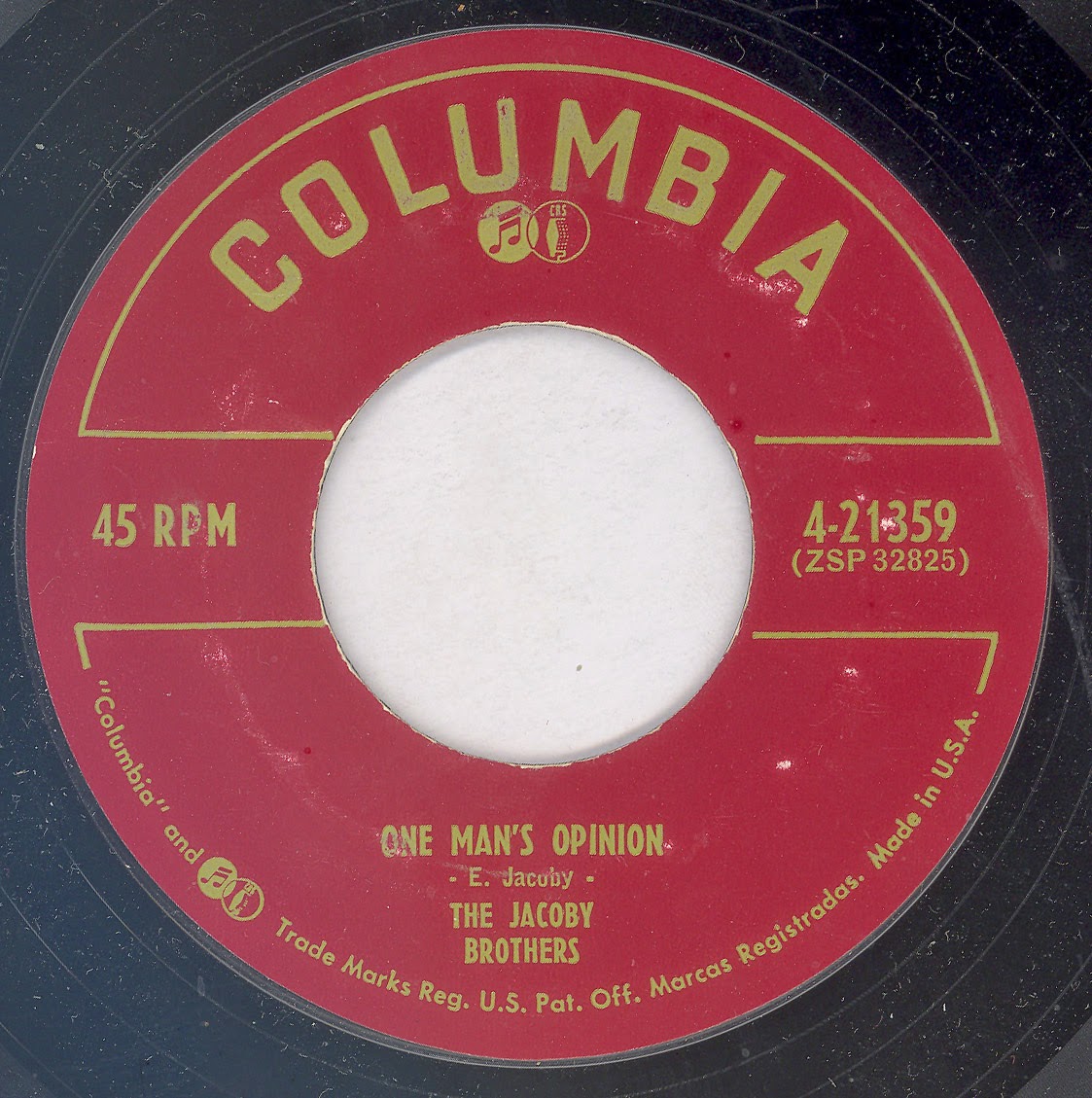 Their COLUMBIA session was supposedly the last time they recorded together as the Jacoby Brothers. However, there was a release on TNT in 1961 credited to The Jacoby Brothers; it has been suggested that this was earlier material, but musically, with drums and piano, it fits the later period of time! 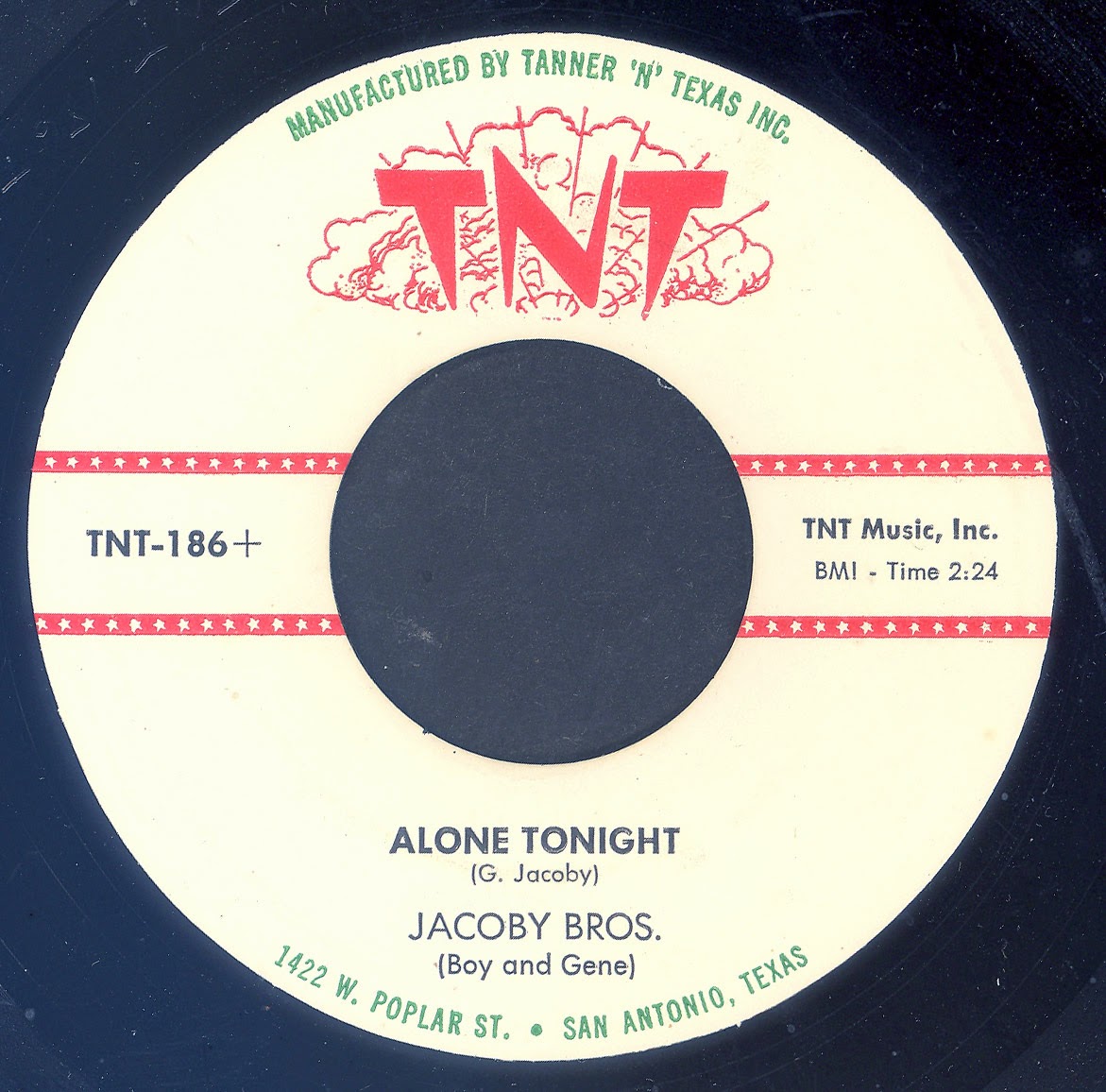 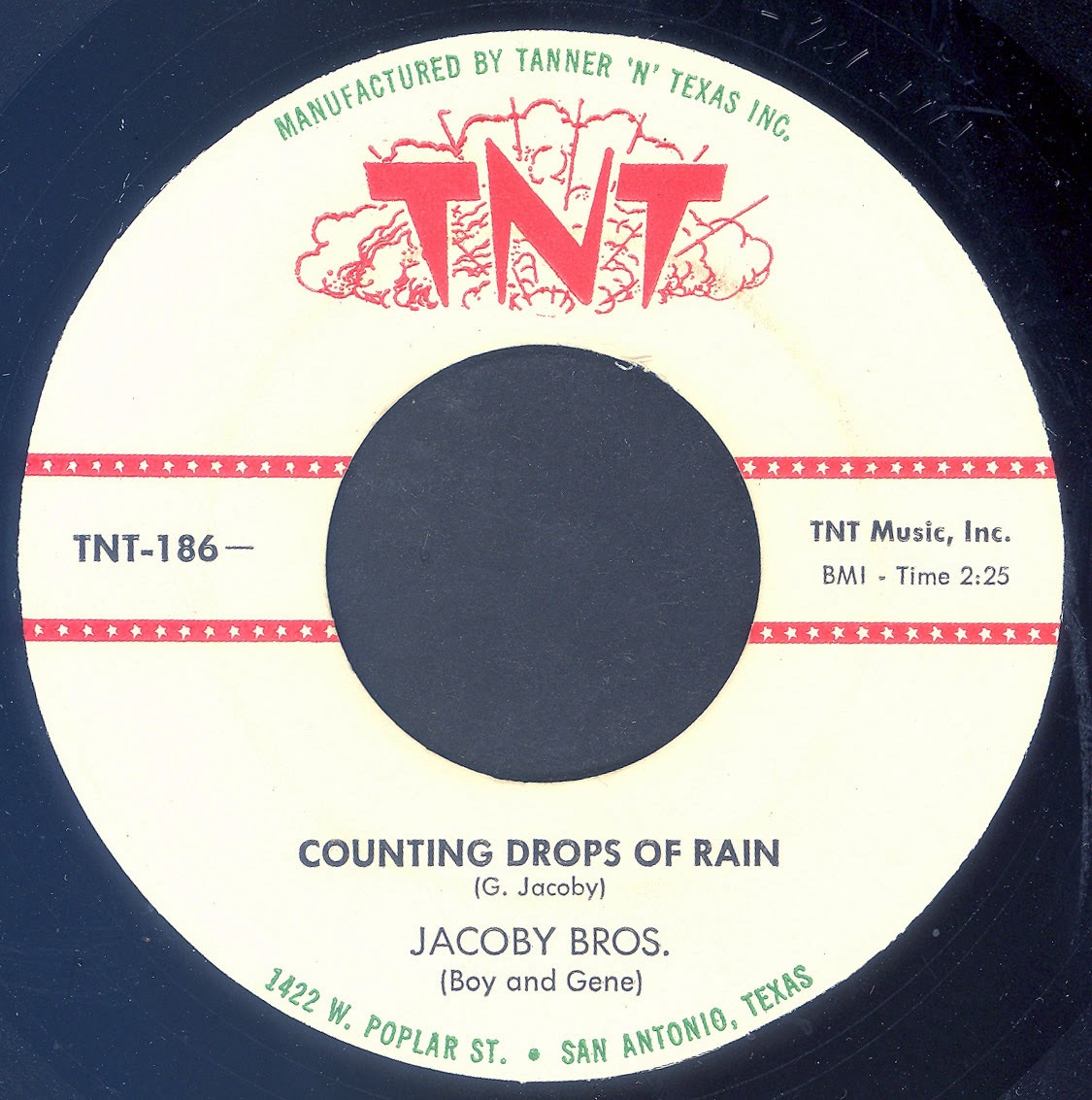 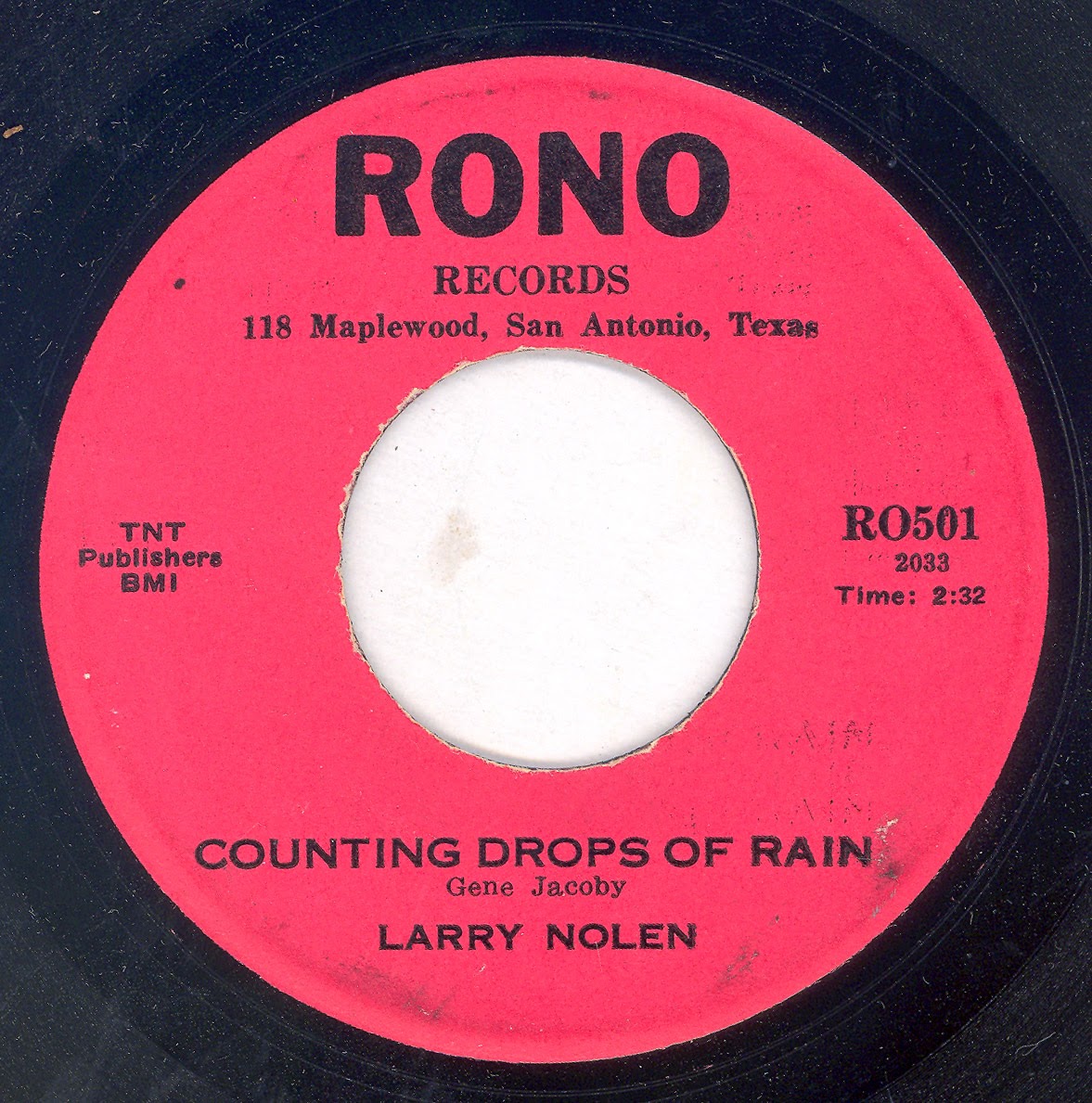 Here is one that I completely overlooked, I am indebted to the DrunkenHobo for drawing this release to my attention. Reverse is "Dream Dust", record dates from 1956 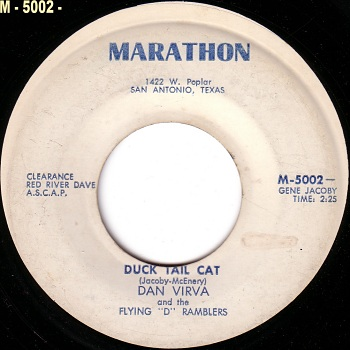 Posted by HILLBILLY RESEARCHER at 14:26 2 comments: