In the mid / late Forties many of the larger independent recording companies, like ALADDIN, APOLLO, ATLANTIC, and MODERN, tested the market to see if they could secure a share of the growing Country & Western record sales. No focus groups were involved, no slick marketing analysis, they just seemed to have put out a hand full or more of records, over a relatively short period of time, and monitored sales. It is interesting to ponder what might have happened if anyone of the aforementioned labels enjoyed significant sales of one of their Country releases, I doubt if they would have reviewed their marketing strategy, as all were fairly established as purveyors of quality R&B and Blues, although it might have led to the formation of a subsidiary company as a vehicle for Country music, who knows it's only a little bit of indulgent speculation.

Peter A. Grendysa's excellent little booklet "ATLANTIC Master Book #1" from 1975 provides us with recording dates, location, details of unissued titles, etc. Now nearly forty years old my well thumbed copy is still the source of much data on all the early aspects of the ATLANTIC story, that was £2.00 well spent (that would have been $4.00 to our American cousins)

ATLANTIC 721
Both sides were recorded at the APEX Recording Studio New York City on 23rd August 1949. Note subtle change to the lyrics of “Drinkin’ Wine Spo-Dee-O-Dee”. 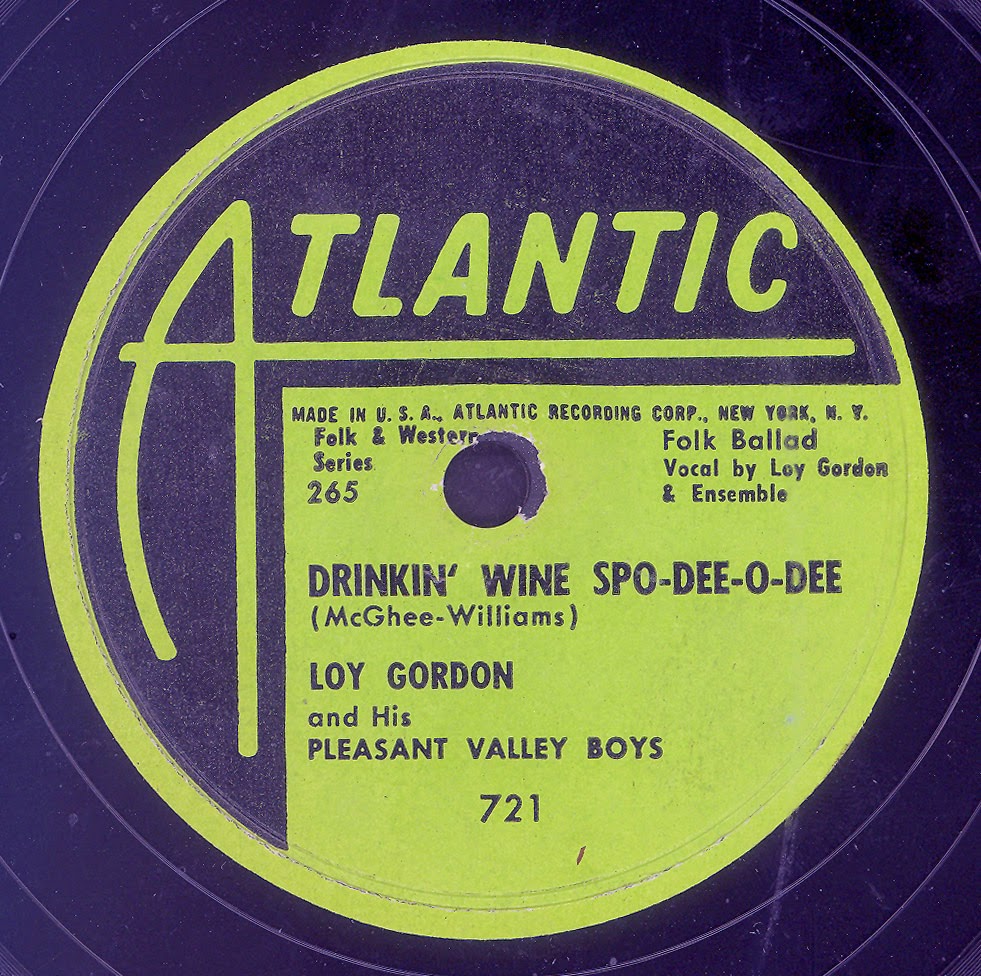 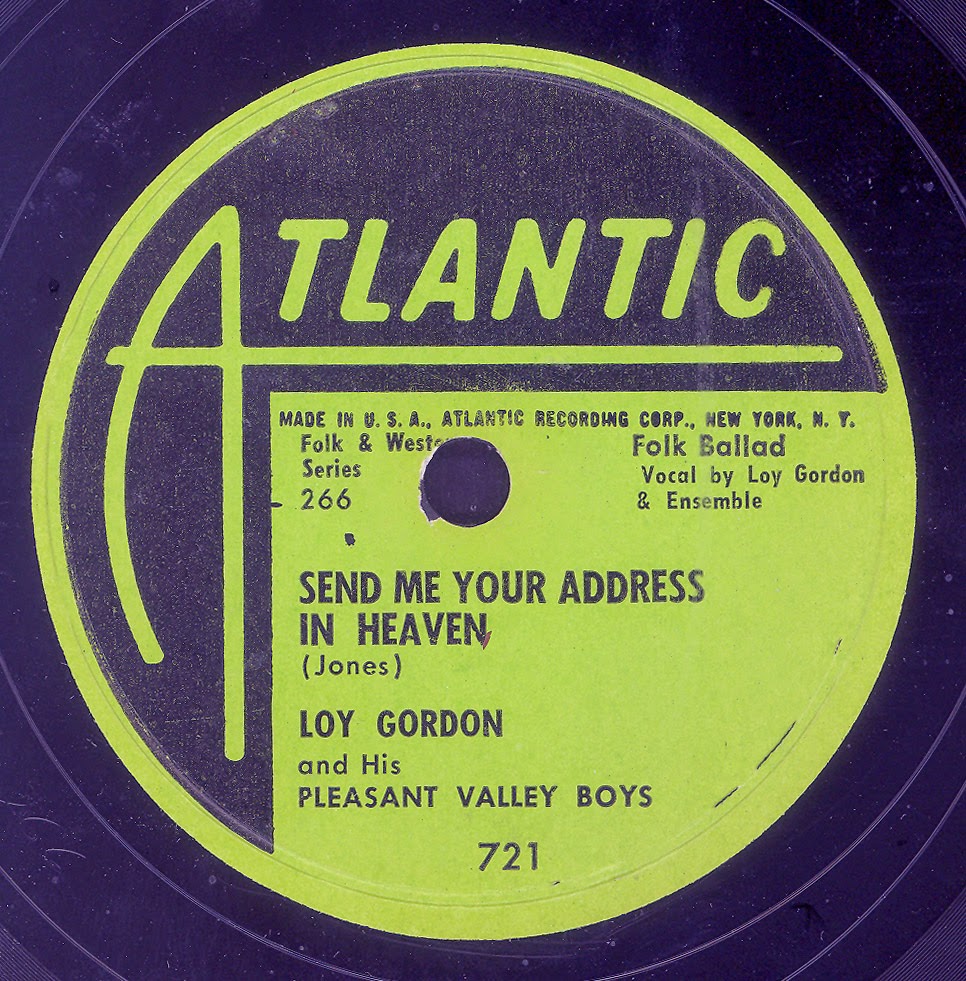 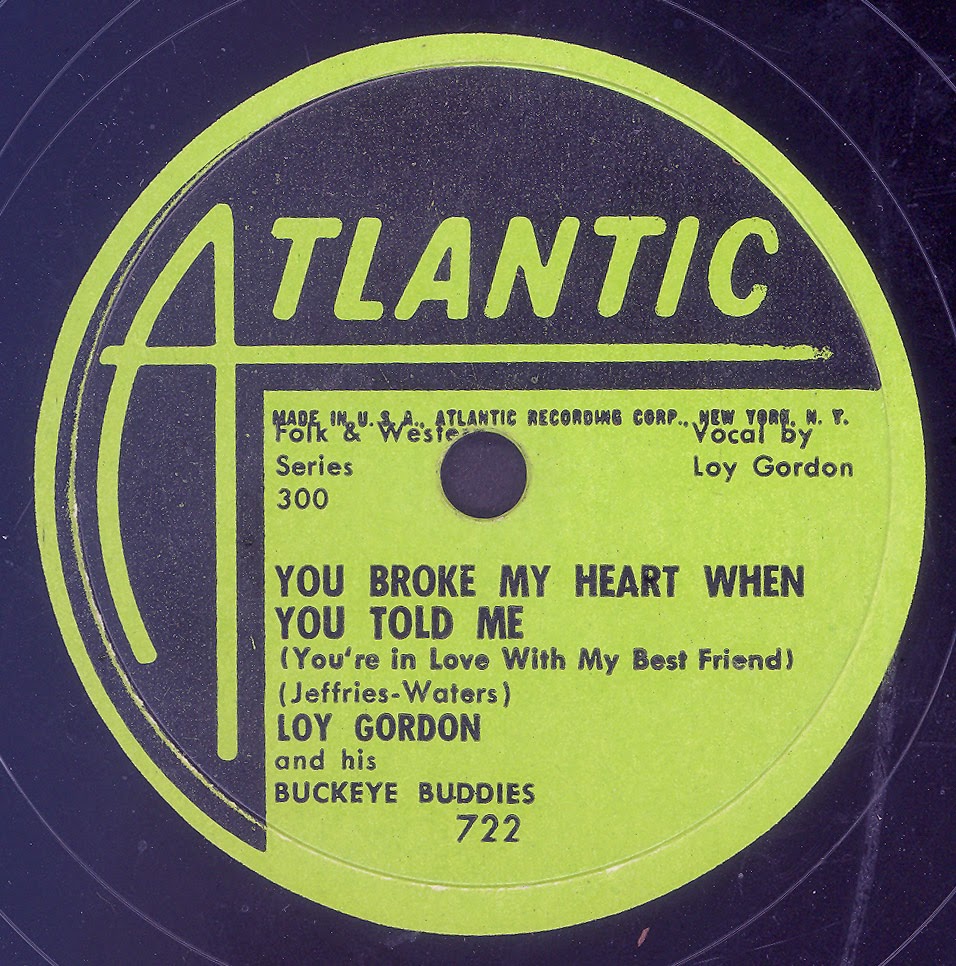 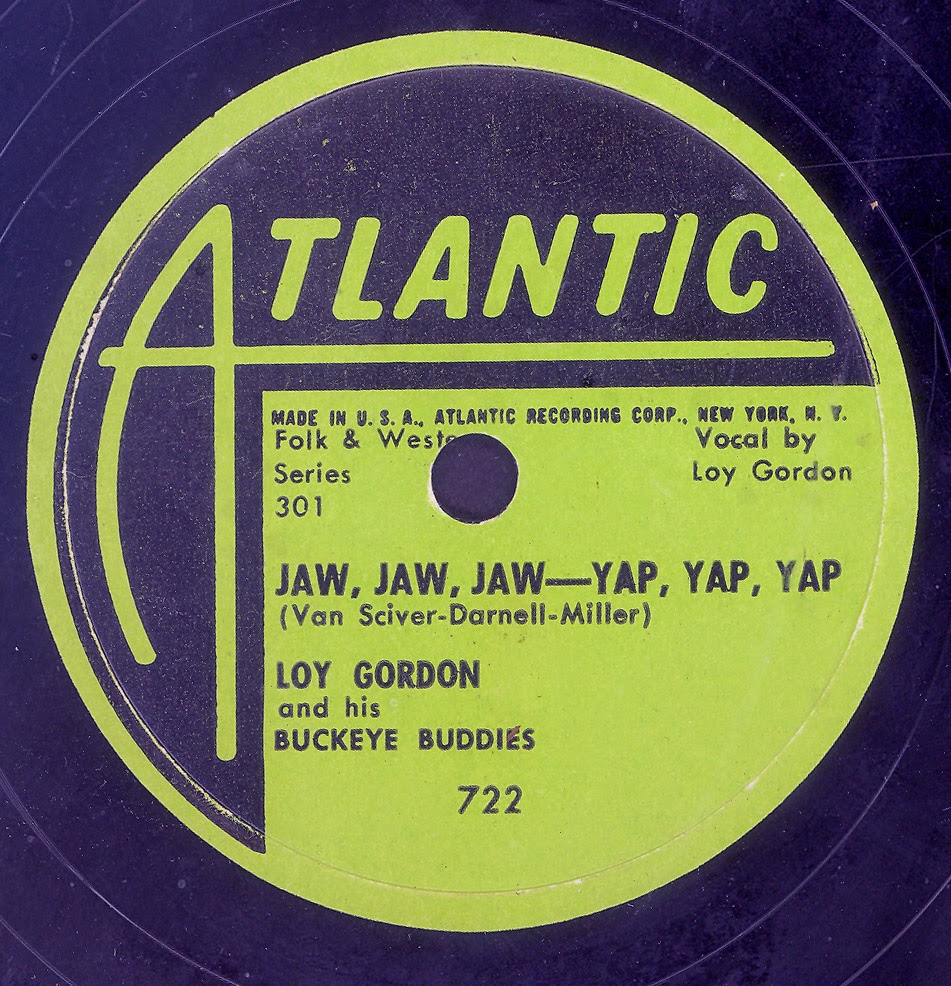 ATLANTIC 723
I'm not sure if the guys at Atlantic knew where to place this release, in any event they dropped it into the 700 series, but removed from the label any mention of The "Folk & Western Series"? In its place are the old familiar musical descriptions "Fox Trot" and "Novelty" .Both sides were cut at Apex in February 1950.  It would appear that Pete Sherman's Showboys, credited here as The Playboys, provide the musical accompaniment. I must admit that I can't think of many Western themed songs ("Rebel Yell!") which feature kettle drums! 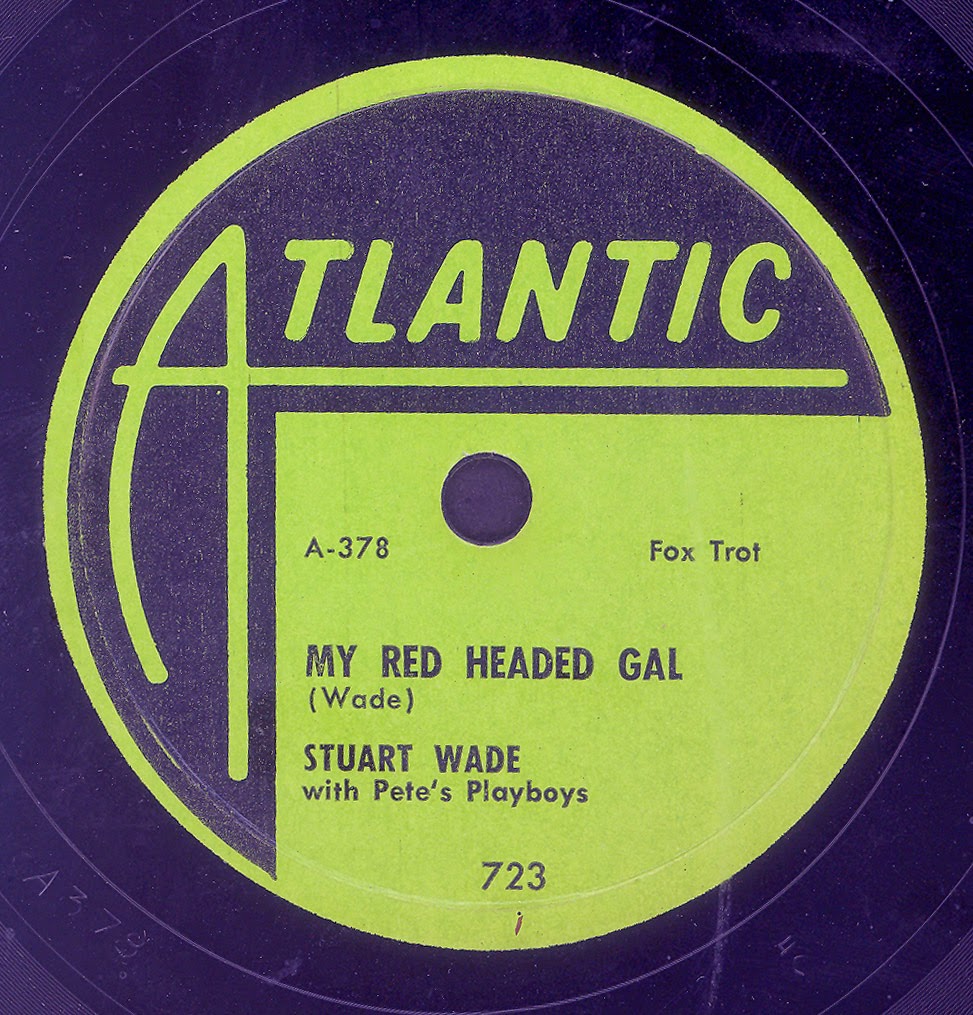 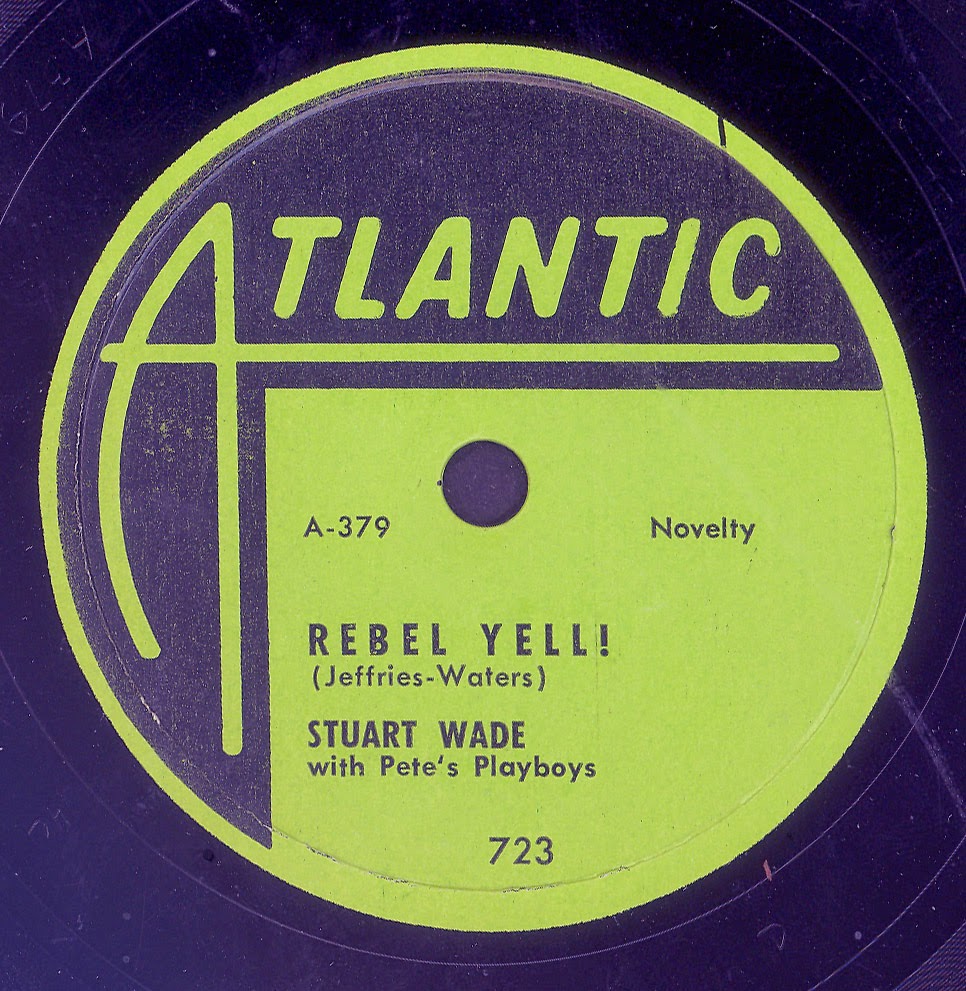 ATLANTIC 724
Pete Sherman and His Playboys recorded five sides for ATLANTIC  at the Apex studio in April 1950. The three unissued titles are (396) "Padlock On My Heart" 9397) "There's A Blue Sky Way Out Yonder", and (400) "When My Dreamboat Comes Home", the vocalist on the issued sides was one Freddie Hughes. You will note from the label scans that the notation "Folk & Western Series" is still absent from the label, although "Yesterday's Dreams" is described as a "Folk Ballad". Pete Sherman later recorded for ARDENE label (posted here 18th May 2010) 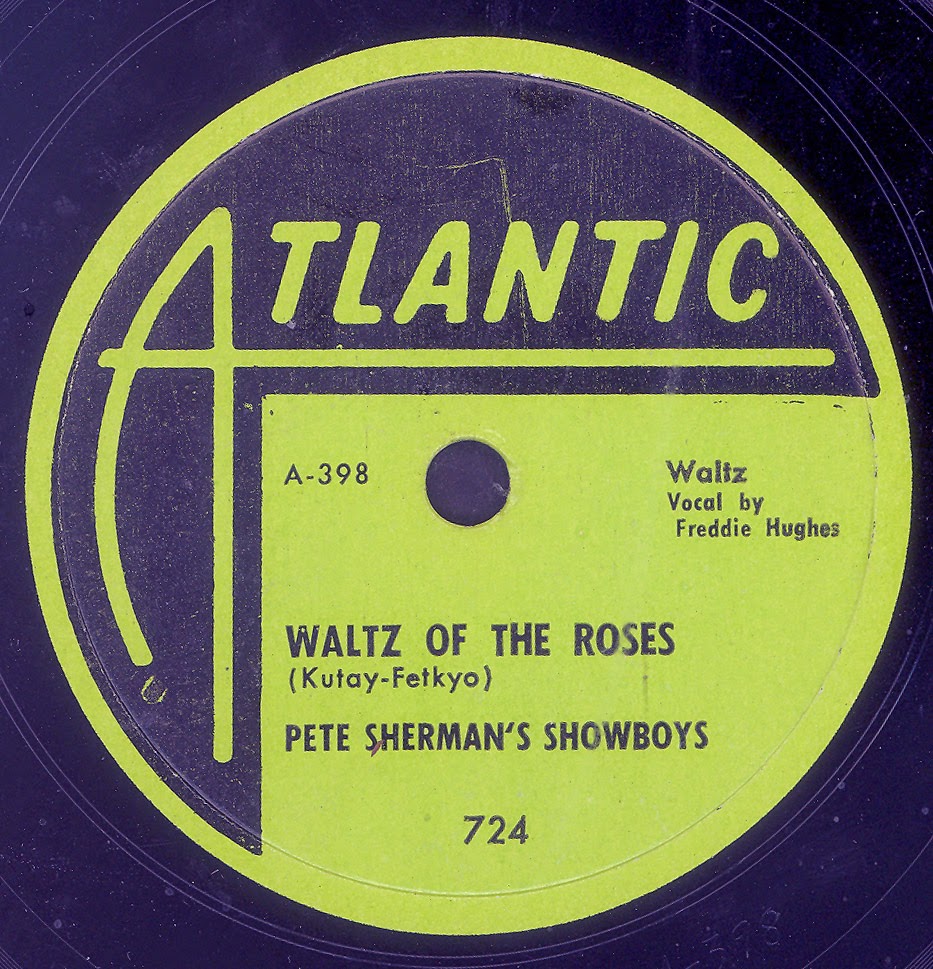 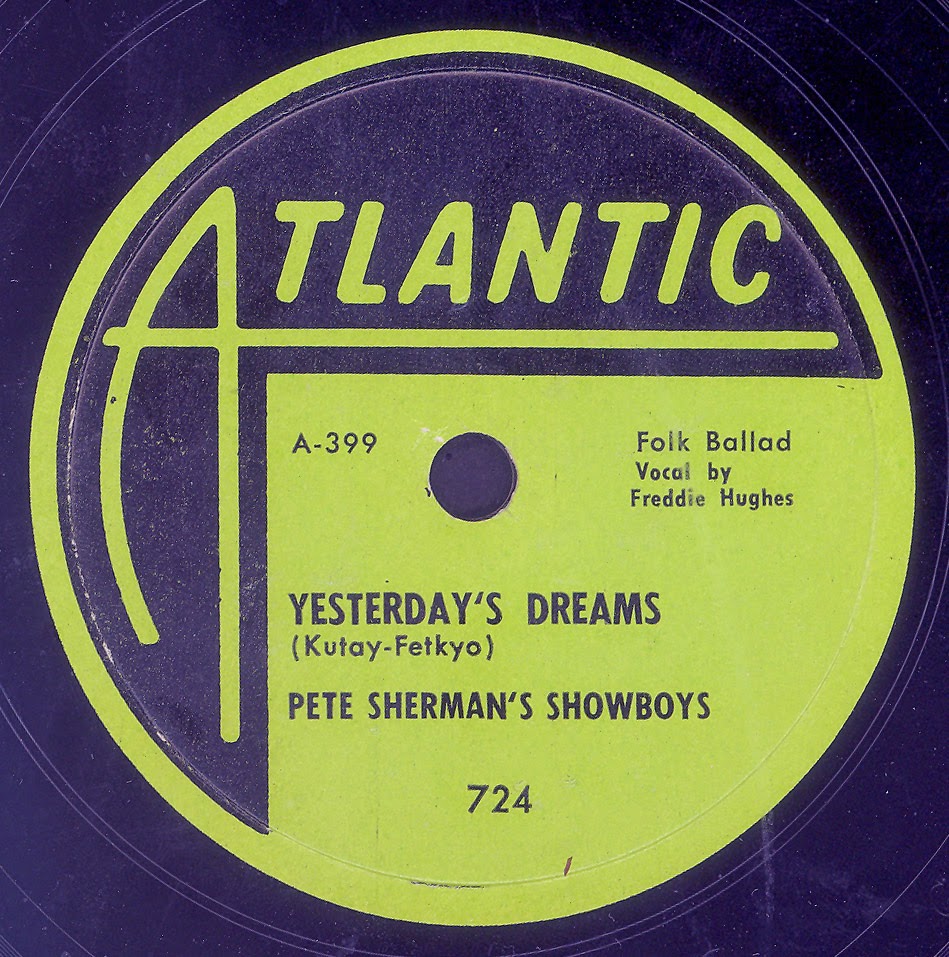 ATLANTIC 725
The notation "Folk & Western Series" returns to the label of ATLANTIC 725. These recordings were purchased, from whom it is not noted, on 12th June 1950. A total of four songs were acquired, the two unissued titles were (448) "I Did Everything To Make You Happy" and (449) "If All My Heartaches Were Roses" 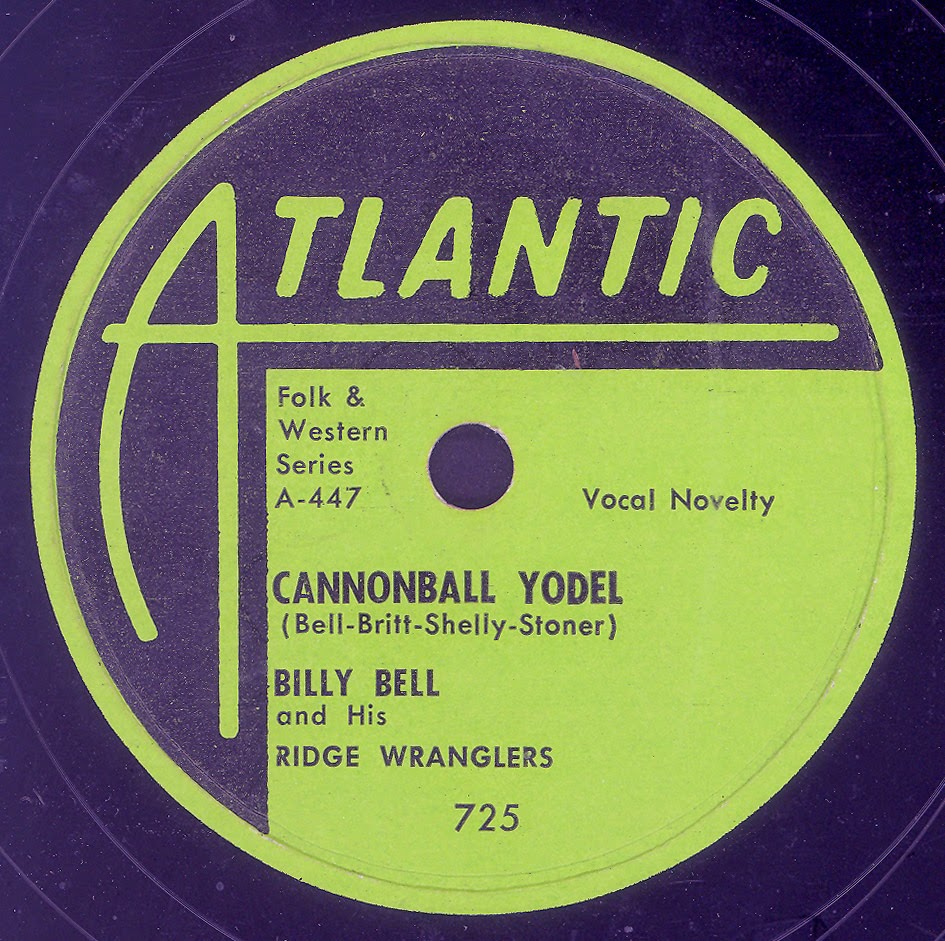 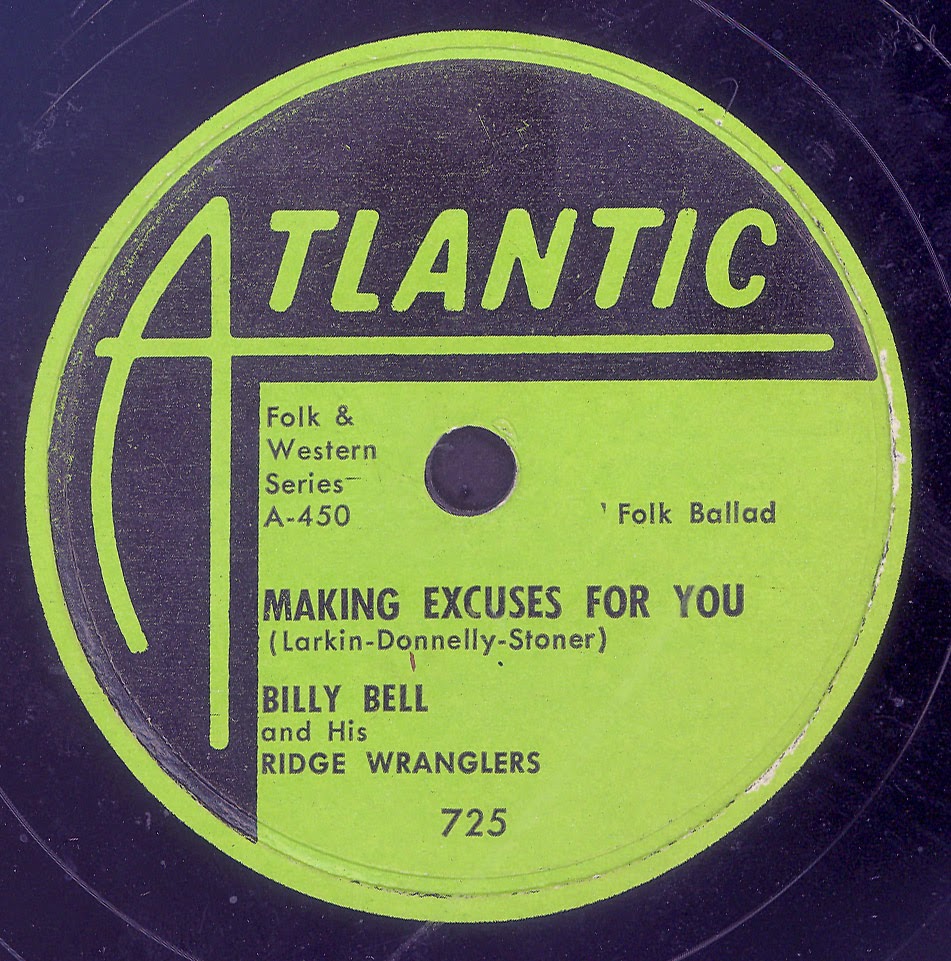 ATLANTIC 726
Another batch of purchased masters, although this time just the three titles, which were acquired, possibly from Lillian Claiborne down in Washington DC, in June 1950. The unissued title from this selection was "Road Of Heartaches" (461). Humorous little label misprint, ATLANTIC 725 is credited to The Howington Brothers and His Tennessee Haymakers? Apart from Dub Howington, who played lead guitar, his brother Roy, bass, the band on these recordings may also include Eddie Dean on accordion, with possibly Herbie Jones on Rhythm Guitar. 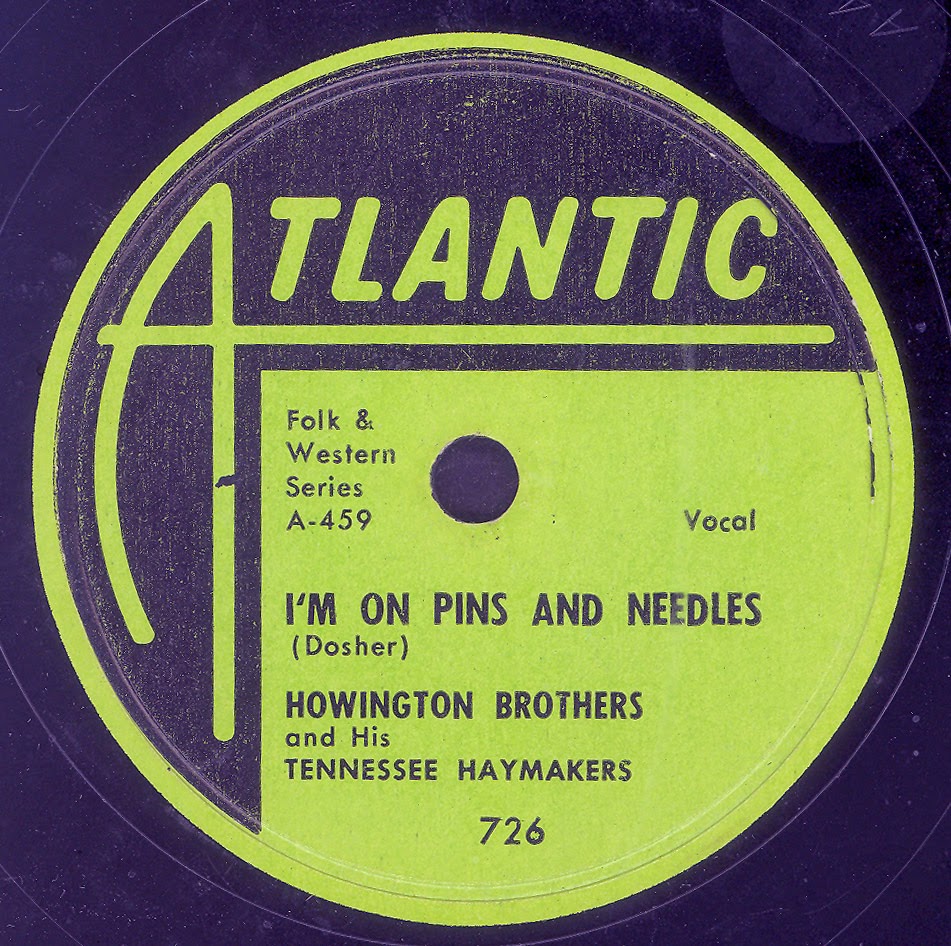 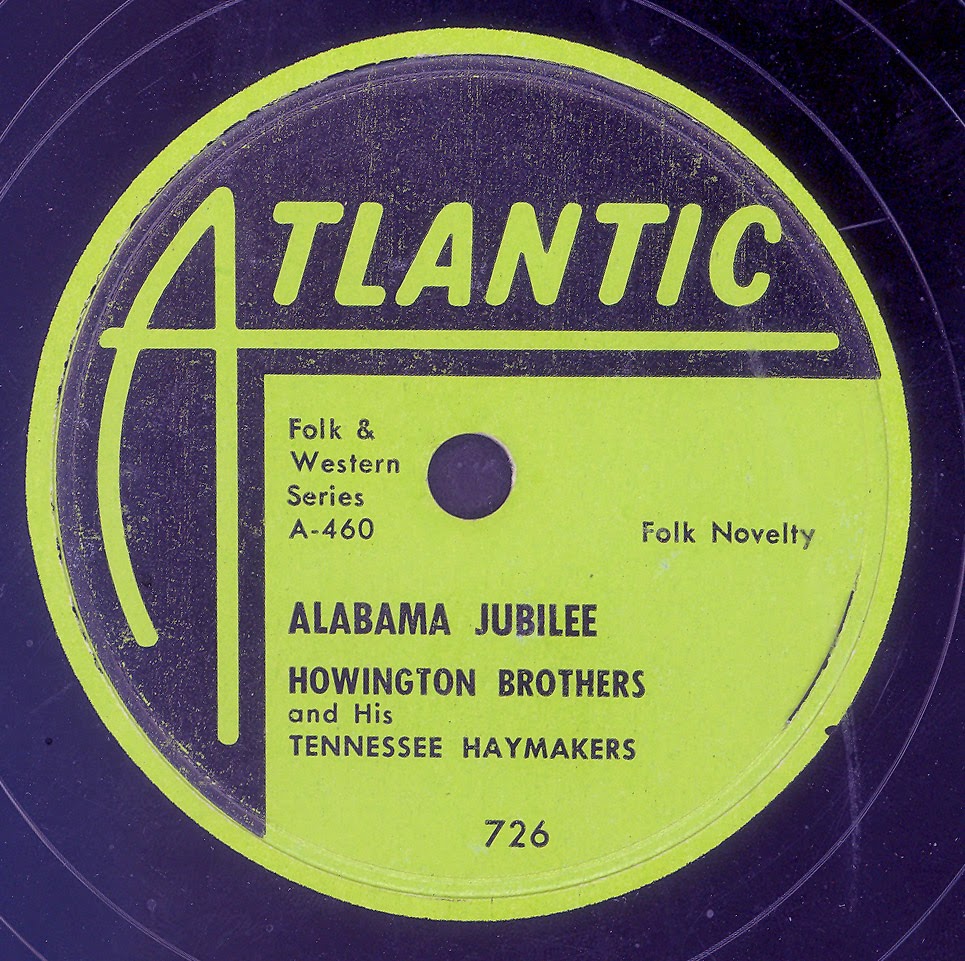 ATLANTIC 727
For many collectors Bill Haley's release is the Jewel in the Crown of ATLANTIC's "Folk & Western Series". Unfortunately I do not have an original copy of the ATLANTIC disc, but I do have a copy of the belated English release of the record, issued in the United Kingdom in 1956. Thanks to "DrunkenHobo", who supplied label scans for ATLANTIC 727, I can now confidently state that the MELODISC label credit of Bill Haley And The Comets is incorrect, it is as you can see from the scans Bill Haley And His Saddle Men. ATLANTIC purchased four masters from James Myers (aka Jimmy DeKnight) in September 1950. The two unissued sides are (524) "Teardrops From My Eyes" and (525) "Loveless Blues". 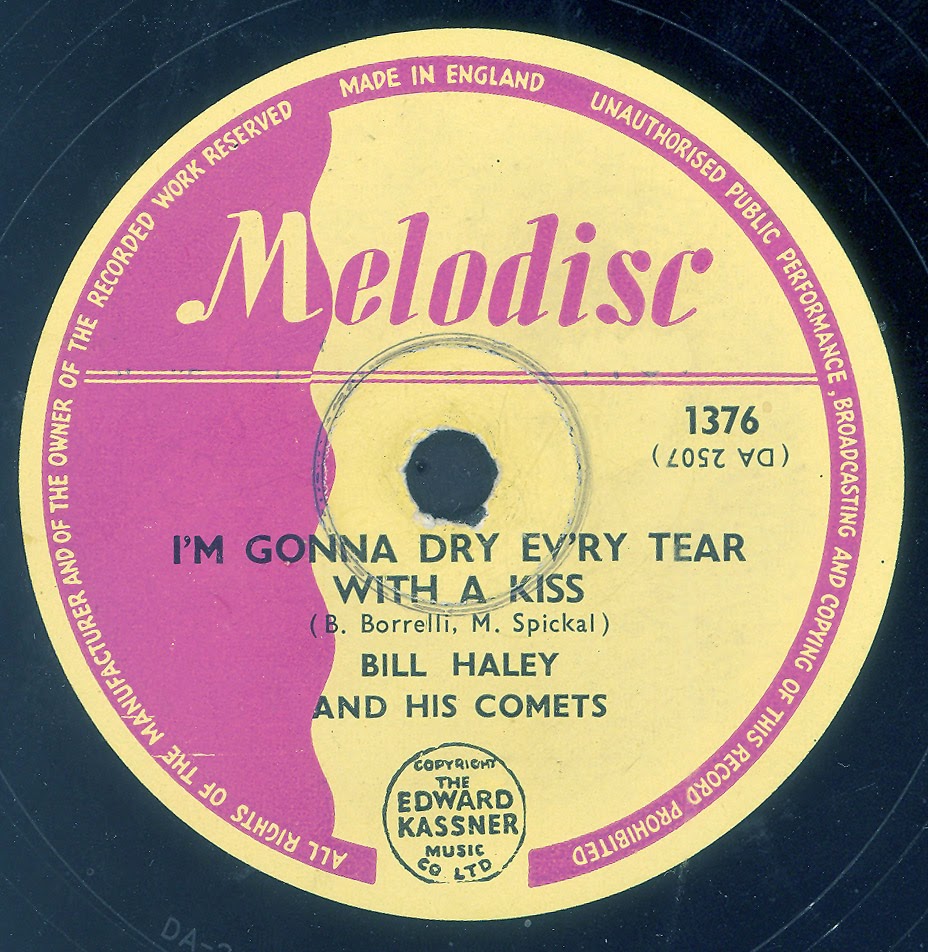 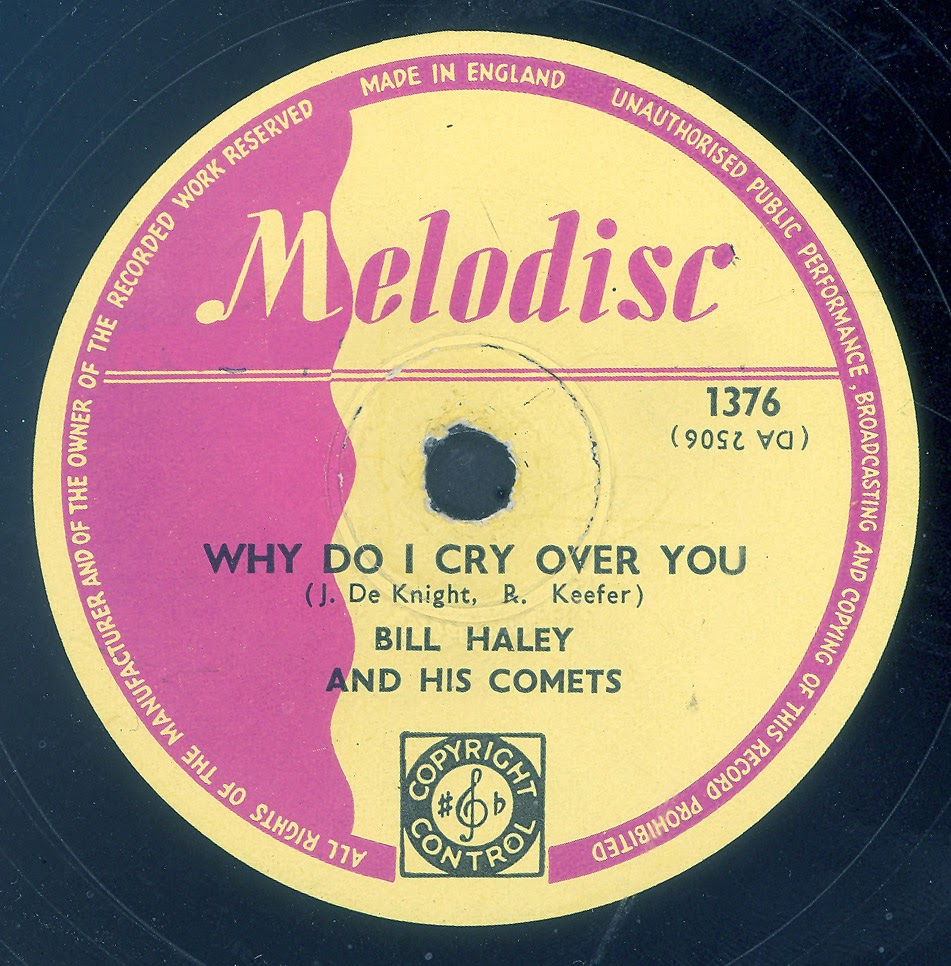 The seven records above does not represent the sum total of ATLANTIC's "Folk & Western" output. In 1953 they put out a record by Buddy Hawk And His Buddies "The Death Of Joe Stalin (Good Riddance)" / "Painting The Big Town" ATLANTIC 7024. There is also the vexed question of Billy Grammer's PLAZA release, it has been suggested that PLAZA was an ATLANTIC subsidiary. Grammer's material was recorded at Radio Station WWDC, Washington, DC and purchased by ATLANTIC in January 1950. There is no notation on label of the PLAZA release that the label was part of ATLANTIC, nor can I find any other reference to PLAZA in the ATLANTIC files. Why didn't they release the two sides in their newly launched "Folk & Western Series", they had already recorded material by Loy Gordon, and the first release in the series was probably out or imminent when ATLANTIC acquired the material in January 1950?

Posted by HILLBILLY RESEARCHER at 14:01 No comments:

The Austin based ECHO label contains quite a few interesting items, here we have a disc by Billy Wells, accompanied by His Western Swing! The most notable thing about this record is that Jack Tripplett is the vocalist, as well as the composer of "I Heard Someone Cry". I have no idea when these two sides were recorded, but I could venture a guess at 1959 (a guess based upon the issue number 5900). Tripplet recorded for the San Angelo based K-PEP label (a 4 Star custom affair) back in 1956; I assume K-PEP was the call sign of a local radio station down in San Angelo, The Phantom Rider Trio (which may or may not include Tripplett) had the adjacent release on K-PEP. The flip side is a pleasant take on pianist Peter DeRose's 1933 composition "Deep Purple" which contains so some nice guitar and fiddle work. 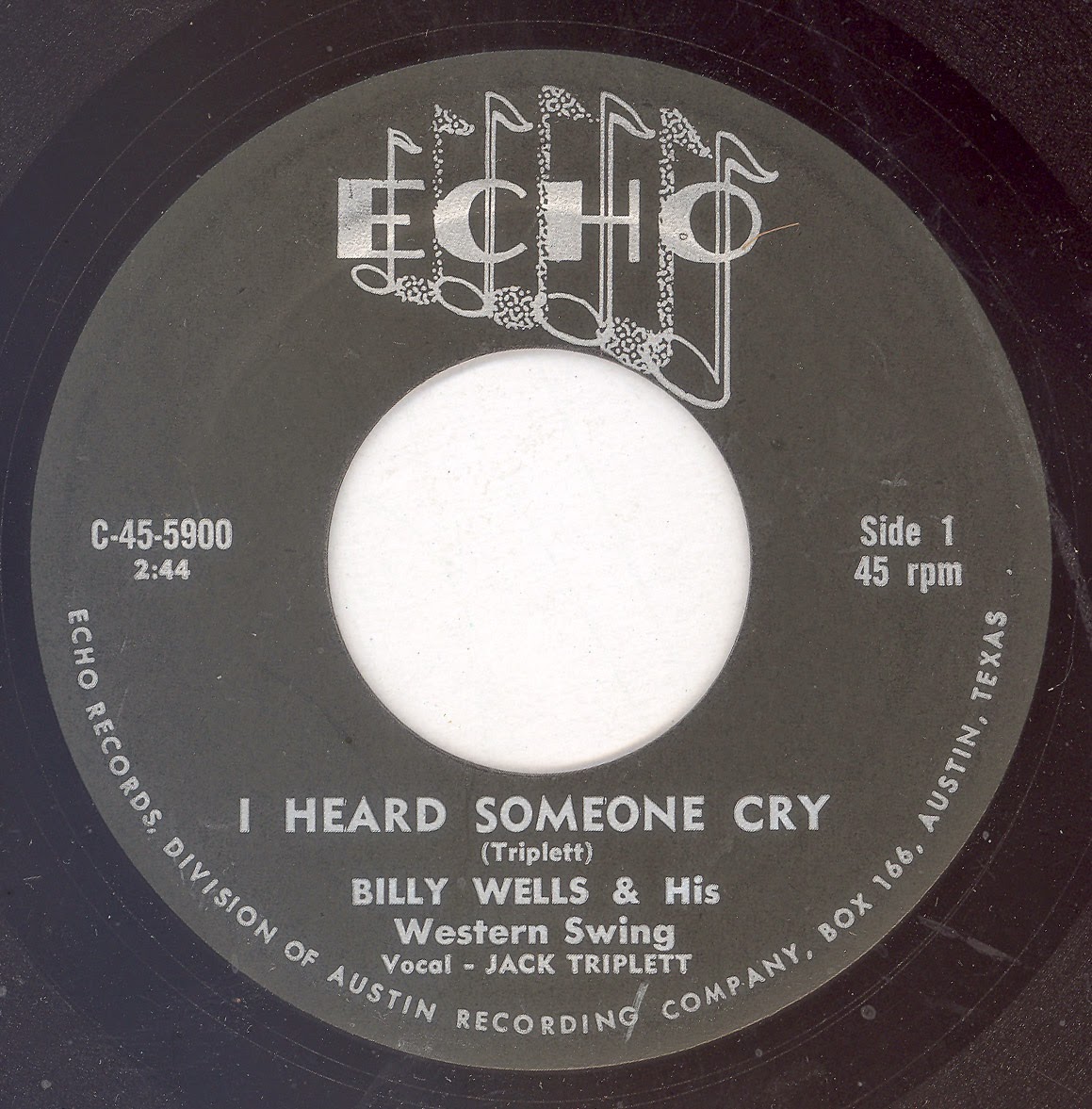 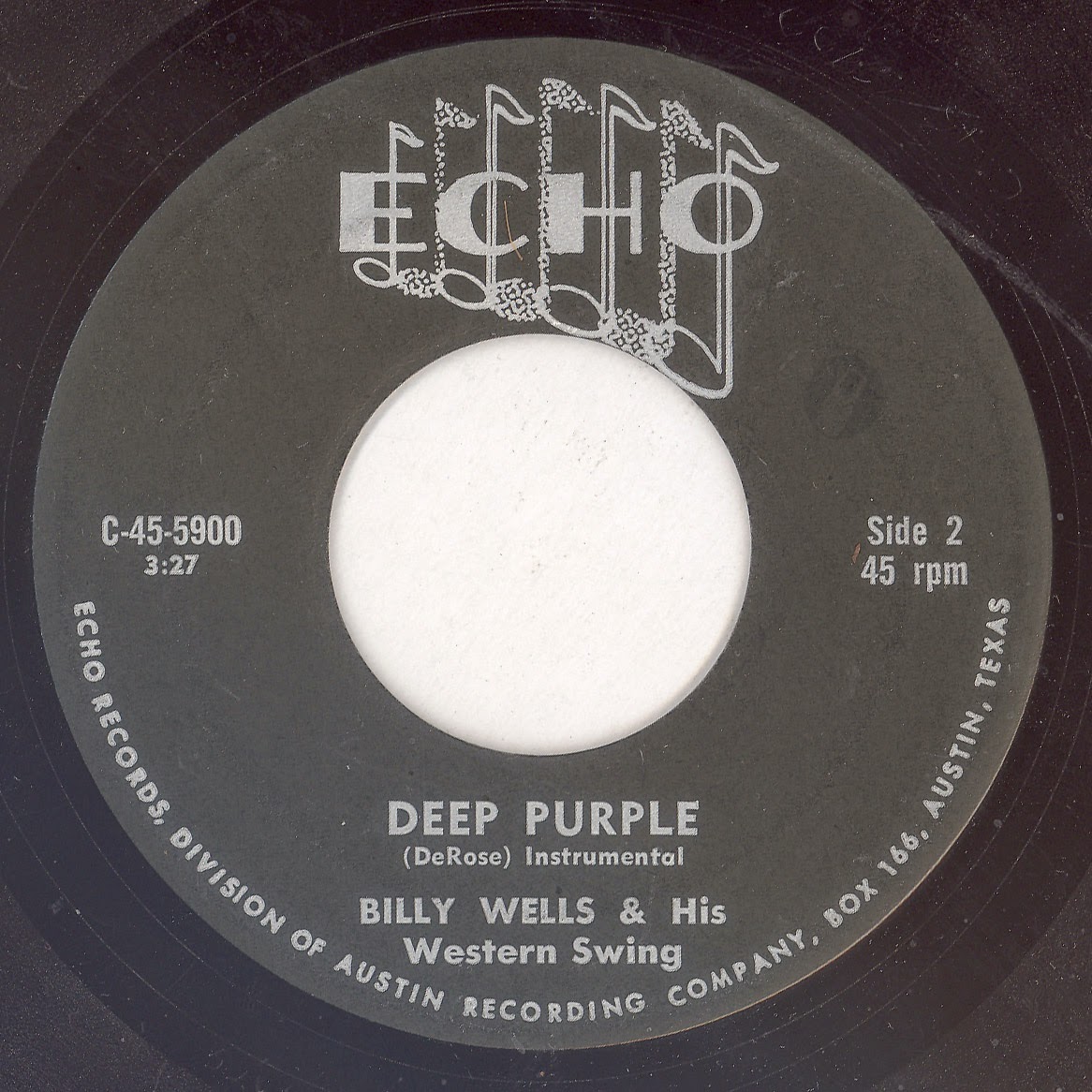 Posted by HILLBILLY RESEARCHER at 19:44 No comments: